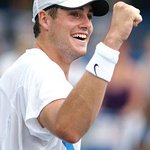 America’s No. 1 tennis player, John Isner, has announced that his annual charity event, the Ebix Charity Challenge, will return to his hometown of Greensboro, North Carolina on December 7, 2013.

All proceeds from the 4th Annual Ebix Charity Challenge will again benefit the UNC Lineberger Comprehensive Cancer Center, which is where Isner’s mother, Karen, was successfully treated during her two battles with colon cancer.

Isner will be joined by former World No. 1 and future Hall of Famer Andy Roddick. Serving as the event emcee will be Justin Gimelstob, a former ATP Player and current broadcaster for Tennis Channel. The event will kick-off with an exclusive youth clinic at Starmount Forest Country Club, giving kids the once-in-a-lifetime chance to play and learn from Isner, Roddick and Gimelstob. Following the clinic there will be an exhibition match between Isner and Roddick, two of the greatest servers in the history of tennis at the 1800-seat Fleming Gymnasium on the campus of the University of North Carolina at Greensboro.

“I am so excited to bring the Ebix Charity Challenge back to Greensboro,” said John. “Both Greensboro and the UNC Lineberger Comprehensive Cancer Center hold a special place in my heart, so I cannot imagine a better setting for this event. I know the community of Greensboro will help us make this the best event yet and raise some money for a very worthy cause. I am also thrilled to have Andy onboard this year and we are really looking forward to putting on a great show for everyone!”

“John’s on court accomplishments and his off court charity work continue to make Ebix proud to have John as our Ambassador around the world,” said Robin Raina, Chairman and CEO of Ebix. “We are delighted to support John and the excellent staff at UNC Lineberger in their mission to fund new research efforts and clinical trials to fight cancer.”

Isner, currently ranked No. 14 on the ATP World Tour, is coming off a strong summer hard court season, after finishing second in the Emirates Airline US Open Series behind current World No. 1 Rafael Nadal. Isner kicked off his summer run by winning his seventh career ATP title in Atlanta, which he followed up with runner-up finishes in Washington, DC and Cincinnati. Isner defeated then World No. 1 Novak Djokovic and current World No. 5 Juan Martin del Potro in Cincinnati en route to his second career Masters 1000 Final. Isner’s career accolades also include reaching the Quarterfinals of the 2012 London Olympics, leading the U.S. to the 2012 Davis Cup Semifinals and winning the longest match in tennis history 70-68 in the fifth set over Nicholas Mahut at Wimbledon in 2010.

Tickets starting as low as $20, exclusive VIP packages and youth clinic spots for the 4th Annual Ebix Charity Challenge hosted by John Isner are all on sale now here.