“I’ve known the Foundation for years now and I see the great work they’re doing for lung cancer patients everywhere,” said Hank Baskett III, who played five years in the NFL. “If it wasn’t for them my dad would most likely not be here today. I’m joining them in their fight to beat lung cancer for all patients.”

Baskett and his father, Hank Jr., appear in a new 30-second Public Service Announcement, aptly titled “The Big Hug,” to raise awareness for lung cancer and funding for the ALCF. The PSA was shot at Papago Park in Phoenix, Arizona during the Your Next Step is the Cure 5k on Feb. 9, 2014, which is part of the ALCF’s nationwide walk/run fundraising series.

“There are so many people who are not aware that lung cancer takes more lives every year than breast, prostate and colon cancers combined. So, together with Hank, we want to raise awareness and educate patients so they can live longer,” said Bonnie J. Addario, stage 3B lung cancer survivor and founder of the ALCF. “I’m thrilled to have Hank as one of our spokespeople because he knows what it’s like when a loved one is diagnosed with lung cancer and he’s passionate about making a difference.”

Baskett’s relationship with the ALCF dates back to 2011 when he met Bonnie Addario at a fundraiser for lung cancer in Los Angeles. Baskett’s father had been recently diagnosed with lung cancer and was struggling with treatment and side effects. As a stage 3B lung cancer survivor and through her expertise, Bonnie knew Mr. Baskett’s response to treatment was not optimal and she was relentless in making sure he got a second opinion. Bonnie referred him to a doctor in Colorado, knowing that Mr. Baskett might be a candidate for a targeted drug. Dr. Ross Camidge ran a molecular test on Mr. Baskett and determined a personalized treatment regime for him. The personalized treatment showed positive results almost immediately. Mr. Baskett has had no signs of lung cancer ever since. April will be the three-year anniversary of his diagnosis.

As an official spokesperson for the ALCF, Baskett’s duties will include appearances at several of the Foundation’s 5k charity runs and the annual gala held in November in San Francisco. Baskett, who appears with his wife Kendra Wilkinson on the reality show “Kendra on Top,” played five seasons in the NFL with the Indianapolis Colts, Minnesota Vikings and the Philadelphia Eagles. Baskett is also a spokesperson for the Griffin Gives Foundation, a nonprofit dedicated to supporting active and retired military, those affected by debilitating disease, and the health and wellness of children. 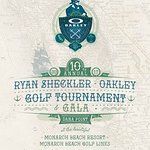