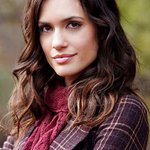 Imagine being five years old and having to walk miles through the bush to meet a health care worker who has the medicine your dying father needs to control his pain. And being the one responsible for feeding him, for taking care of him. Then imagine he dies and you’re left alone in the world with no one to care for you.

Throughout Sub-Saharan Africa, this is the story of thousands of children who are orphaned as a result of losing one or both parents to HIV/AIDS and cancer. With no one to support them, they are forced to drop out of school and look for casual jobs, like selling ground nuts on the street in urban areas, or begging for money in order to survive. The Road to Hope program began as a way to transition these children to a better life.

Pretty Little Liars star and current ambassador for The Hospice Foundation, Torrey DeVitto, will host the Road to Hope charity event to raise money and awareness for this cause. DeVitto was part of the Hospice Foundation’s documentary film crew that recently returned from three and a half weeks of filming in Uganda, Kenya and South Sudan.

According to Mike Wargo, COO of The Hospice Foundation and the film’s producer/director, “Road to Hope explores the unique challenges of orphaned children after caring for their dying parents in poverty-stricken areas of Sub-Saharan Africa. We’re telling their stories through the lens of caring and supportive people, like Torrey, who have emerged to offer love and guidance as these children seek to rebuild their lives.”

“When I was in Africa as part of the film crew, I got to meet some of the children in the program,” shared DeVitto. “The initial inspiration for the program was a five year-old child named George, who had been the sole caregiver for his dying father. When his father died, he no longer had anyone to care for – and no one to care for him. Because of the Road to Hope program he is now attending a good school and doesn’t have to worry about where his next meal will come from. And the cost to sponsor a child like George is less than a dollar a day.”

The Road to Hope charity event will be held on Monday, April 14th at West Hollywood’s trendy Bootsy Bellows nightclub. All proceeds will benefit the Road to Hope program, which is co-sponsored by the Hospice Foundation and the Palliative Care Association of Uganda (PCAU). Based in Kampala, Uganda, PCAU is a non-governmental organization whose mission is to make palliative care accessible to all Ugandans. Caring for the orphaned children of their patients is a natural and important extension of their mission.

The host committee for the event casts some of Hollywood’s favorite young celebrities and includes Brant Daugherty, Torrey DeVitto, Chris Evans, Ian Harding, Arielle Kebbel, Bethany Joy Lenz, Lindsey McKeon, Brittany Snow, and Daphne Zuniga. The evening will include special performances by Pia Mia and Trevor Jackson and guests will also be rocking to the tunes of a surprise celebrity DJ.

“Our deepest thanks go out to Torrey and the entire event committee for making more people aware of the situation and how they can help put these children on the Road to Hope,” added Wargo."

The doors and red carpet will open at Bootsy Bellows at 7:00 p.m., with specialty cocktails provided by Akvinta Vodka and passed appetizers until 11:00 p.m. The dress for this 21+ event is business or cocktail attire. General admission for guests will start at $50 and can be purchased by visiting Eventbrite.com.

PCAU meets many child caregivers as they work to make palliative care accessible to those who are dying throughout the country. The Road to Hope fund provides ongoing support for children that have lost one or both of their parents, most often to HIV/AIDS or cancer. The children in this unique program are a reminder of the plight of child caregivers in Uganda, where the life expectancy is 54 and median age is 15 years old.

The Hospice Foundation is the supporting foundation for Center for Hospice Care (CHC), an independent, community-based, not-for-profit organization based in Northern Indiana. Partnered since 2008, PCAU, CHC and the Hospice Foundation work together on various initiatives that improve the quality of living for those facing end-of-life illnesses.

Join Torrey DeVitto in her fight to help prevent suicide