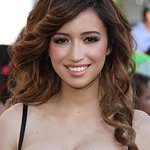 From buying all-electric cars to installing solar panels on their roofs, environmentalists across the country are taking steps to save the planet — but some of them are dragging their feet when it comes to taking that essential step: going vegan.

So PETA and Twilight and The Walking Dead star Christian Serratos, who is a longtime vegetarian and PETA supporter, have purchased ads that will be placed on electric car charging stations, targeting the very people who want to make a difference and urging them to go all the way.

The new ads bluntly proclaim, “Producing two strips of bacon generates three times the amount of greenhouse gases that driving 1 mile in a Prius does. Save the world—go vegan.” The ads will be up in time for Earth Day.

“Environmentalists who have switched to all-electric cars may be shocked to discover that the hybrids they deemed not ‘green’ enough are still far ‘greener’ than bacon,” Serratos says. “PETA’s message for Earth Day and every day is that the most effective way to help the environment — and animals — is to go vegetarian.”

According to the United Nations, raising animals for food is “a top contributor to the most serious environmental problems, at every scale from local to global.” A staggering 51 percent or more of global greenhouse-gas emissions are caused by animal agriculture, according to a report published by the Worldwatch Institute. And of course, the meat industry is responsible for the daily suffering and terrifying deaths of billions of animals every year.

Serratos is part of a growing list of celebrities — including Bones star Emily Deschanel, Nikita and Divergent star Maggie Q, and Social Distortion frontman Mike Ness — who have teamed up with PETA to point out that the meat industry has a devastating impact on the planet.