Goodwill And Sugarland's Kristian Bush Partner To "Give It Away" 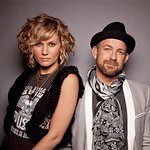 Goodwill Industries International and Kristian Bush, one-half of Platinum-selling country duo Sugarland, are partnering to raise awareness of Goodwill’s mission of transforming lives through the power of work.

It’s a partnership inspired by the message of Bush’s debut solo single, the Top 40-and-climbing hit Trailer Hitch, which reminds us that we collect so many things that we don’t need, and we can’t take it with us when we go… so why not “give it away”? Bush announced his new partnership with Goodwill when he appeared on NBC’s TODAY Show this morning (10/27).

“I think a lot of people feel like you need to have extra money in order to be a ‘philanthropist’ or make a difference in the world,” said Bush. “But we all have a box or a bag of things we don’t need sitting around in our house or our car. Anyone can become a job creator just by donating that stuff to Goodwill, and when you learn more about what Goodwill does with the proceeds from your donations, you will be amazed. It’s philanthropy that anyone can engage in, and it really does change lives.”

Bush will join Goodwill in encouraging music fans to donate clothing, electronics and small household goods in their communities, and reminding them that the revenue from the sale of these donations goes directly to help find employment for people with disabilities, disadvantages, or anyone facing challenges. Bush will also build awareness of Goodwill’s mission at his concerts, in media interviews, on blogs, and by sharing messaging through his social media channels.

By using the catchy, irresistible hook of “Trailer Hitch,” Bush hopes to reinforce that Goodwill is so much more than a thrift shop – it is vital organizations throughout the United States and Canada, providing job and skills training, employment placement and community-based services such as career counseling, resume preparation, mock interviews, child care, financial education, and transportation. Every 27 seconds of every business day, a person served by Goodwill is placed in employment.

“Almost everyone knows someone who is struggling to make ends meet, and unemployment in our communities is still a hardship. But the simple act of giving away what you no longer need builds independence and dignity for people who need support to provide for themselves and their families,” said Jim Gibbons, president and CEO of Goodwill Industries International. “Bush’s message in ‘Trailer Hitch’ aligns perfectly with Goodwill’s mission by helping people realize the impact they have by donating the items they no longer need to Goodwill.”