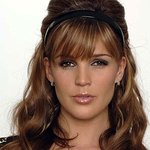 Celebrity models Abbey Clancy and Danielle Lloyd as well as former Atomic Kitten singer Liz McClarnon have taken to Twitter to voice their outrage over what an RSPCA officer described as the worst case of cruelty to animals he’s ever dealt with.

The beauties have also alerted their nearly 1 million combined Twitter followers to PETA's £10,000 reward for information leading to the arrest and conviction of the person(s) responsible.

A small dog was reportedly left to die in Birkenhead cemetery after what appeared to be a lifetime of abuse that left virtually every bone in his body broken. Fondly named Elmo by veterinary staff, he was humanely euthanised because of the severity of his injuries.

“Someone in Merseyside must know something about the cruel individual who committed this atrocious act, and we’re calling on anyone with information to come forward”, says PETA Associate Director Elisa Allen. “A person capable of deliberately causing this kind of suffering to a helpless animal demonstrates a very worrying psychological state and must be found.”

Anyone with information about this case is encouraged to contact the RSPCA on 0300 1234 999.