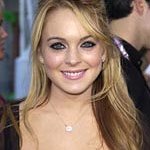 The show was a huge success, and the money raised went to the Women’s Cancer Research Institute for ovarian cancer at Cedars-Sinai Medical Center in Beverly Hills, a multidisciplinary program that is working to reduce the threat of cancer to women through research, education, early detection and prevention.

22-year-old Lohan started in show business as a child fashion model for magazine advertisements and television commercials. At age 10, she began her acting career in a soap opera; at 11, she made her motion picture debut by playing identical twins in Disney’s 1998 remake of The Parent Trap.

She rose to stardom with her leading roles in the films Freaky Friday, Confessions of a Teenage Drama Queen, Mean Girls and Herbie: Fully Loaded. Her subsequent roles include appearances in A Prairie Home Companion and Bobby. In 2004, Lohan launched a second career in pop music yielding the albums Speak (2004), A Little More Personal (Raw) (2005) and the forthcoming Spirit in the Dark.

Race to Erase MS announced today that its historic 25th Anniversary Gala will take place on Friday, April 20 at The Beverly Hilton in Los Angeles, and will be hosted by HQ Trivia’s Scott Rogowsky. More →