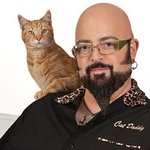 As part of the new partnership, The Jackson Galaxy Foundation will now be known as The Jackson Galaxy Project, and will join other distinguished initiatives as a GreaterGood.org signature program. Rooted in the goal to better the lives of animals at risk and the people who care for them, the program was founded by Jackson Galaxy, animal advocate, cat expert and host of Animal Planet’s hit show My Cat From Hell.

“We began collaborating with Jackson Galaxy about three years ago, to great success,” said Liz Baker, Executive Director of GreaterGood.org. “I am thrilled to officially join forces, and work together to expand his philanthropic endeavors. As part of GreaterGood.org, we’ll be able to create even more innovative programs that improve the lives of both people and pets.”

Protecting People, and their Pets, From Violence

As part of the marriage with GreaterGood.org, The Jackson Galaxy Project will work to create Pet-Friendly Domestic Violence Shelters — something that scarcely exists. This program will retrofit existing shelters to create safe, home-like environments for animals, so people seeking refuge don’t have to make the excruciating choice to leave their pet behind. With Jackson Galaxy’s expertise in the area of pet sheltering and catification, pet-friendly shelters can be thoughtfully designed to reduce stress for the relocated pets of victims.

As October is Domestic Violence Awareness month, it is estimated that 52 percent of victims in shelters leave their pets with their batterers according to the National Coalition Against Domestic Violence. Even more alarming, 71 percent of pet-owning women entering shelters reported that their batterer had injured, maimed, killed, or threatened their family pet. The fear of leaving a pet behind is so real, that up to 40 percent of domestic violence victims are unable to escape their abusers because they are concerned about what will happen to their pets when they leave.

“I started working with GreaterGood.org years ago because I admired their ability to help so many animals and people worldwide without compromise. It’s an honor to officially partner with them to help save even more lives. Creating pet friendly domestic violence shelters is an auspicious beginning to what will be an amazing partnership. After all, the team at GreaterGood.org are not just colleagues, they are like-minded friends that I trust to carry my vision into the future,” offered Jackson Galaxy.

This new program has the ability to save lives by eliminating the dilemma of whether to seek safety and leave a pet behind, or stay in a dangerous environment.

Additional programs in The Jackson Galaxy Project include:

• Cat Pawsitive – A clicker training program for shelter cats to increase their chances of getting adopted. Cats exposed to this reward-based training method gain confidence and experience reduced stress. To-date 18 shelters have participated, and 400 cats have graduated the training program.
• The Barry Fund – Created in honor of Jackson and his wife’s cat, Barry, the fund provides assistance for cats needing costly medical care. The program has raised close to $10,000 so far, and is currently focused on providing for treatment that cures sheltered cats with Hyperthyroidism.

“We now have the ability to make a much greater impact, while maintaining the same beliefs and passions – a foundation that will make a profound difference for the animals we care about and the humans who care for those animals,” Jackson concluded.

For more information or to donate to The Jackson Galaxy Project, visit TheJacksonGalaxyProject.org.

Join The Stars For Animal Legal Defense Fund's Cruise For A Cause Oct 27, 2017

On Saturday, November 4, 2017 celebrities and animal advocates will be taking to the seas for animals in the second annual Animal Legal Defense Fund Cruise for a Cause. More →

The Scoop on Feral Cats PSA