In addition, Bryan Terrell Clark (HAMILTON, MOTOWN: THE MUSICAL), Robert Creighton (CAGNEY, FROZEN), Lesli Margherita (MATILDA, DAMES AT SEA), Stephanie Gibson (CHARLIE AND THE CHOCOLATE FACTORY) and Alex Getlin (ANYTHING CAN HAPPEN IN THE THEATER) were among the Broadway talents that graced the stage. Making a special appearance, New York Yankees legend and Latin Grammy-nominee, Bernie Williams, performed in memory of his father who succumbed to idiopathic pulmonary fibrosis (IPF) in 2001.

The exclusive fundraiser at New York City’s Edison Ballroom was hosted by Broadway star and comedienne Julie Halston. As leading advocates for the PFF, Halston and her husband Ralph Howard co-created the event after their friend, Associated Press theater critic Michael Kuchwara, passed away from IPF. Coincidentally, Howard was subsequently diagnosed with IPF and has received a lung transplant.

“Broadway Belts for PFF! has been a labor of love from the start,” said Julie Halston. “And through the enormous generosity of the Broadway community we have grown bigger every year to provide resources for pulmonary fibrosis patients and their families.”

Broadway Belts for PFF! was directed by Carl Andress (THE DIVINE SISTER) with Christopher McGovern (CAGNEY) as Musical Director and Ed Windels as Music Coordinator, to honor Broadway producer Margo Lion. The benefit was produced for the eighth straight year by D. Michael Dvorchak, Sue Frost (MEMPHIS, COME FROM AWAY), Julie Halston and Ed Windels.

“Broadway Belts for PFF! is an extraordinary opportunity for us to raise awareness and funds for pulmonary fibrosis programs and research,” said William T. Schmidt, PFF President and CEO. “On behalf of the pulmonary fibrosis community, I am pleased to thank and congratulate Julie Halston and the entire Broadway Belts team for a truly outstanding and memorable event.”

Proceeds support the PFF’s work aimed at improving the quality of life for individuals living with pulmonary fibrosis and to fund research for a cure for the devastating disease involving scarring in the lungs. PF affects 200,000 Americans and results in more than 40,000 deaths annually. Fifty thousand new cases are diagnosed each year. There is no known cure for PF. 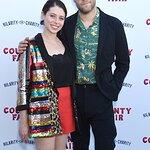