During the month of May, NAMI, the National Alliance on Mental Illness, will observe Mental Health Month to raise awareness of mental illness.

One in five adults in the United States lives with a mental health condition.

This year, NAMI is launching “CureStigma” a new campaign that builds on the successful #StigmaFree initiative and positions stigma as a “social virus” that is spreading across America. Stigma is a sign or sense of disgrace that sets someone apart from others. Navigating life with a mental health condition can be tough, and the isolation and blame that is often encouraged by stigma can create huge challenges to moving forward in one’s recovery journey.

“Stigma is dangerous for the millions of Americans affected by mental health conditions. It causes people to feel ashamed for something that is out of their control, prevents them from seeking help, and even takes lives,” said Mary Giliberti, CEO of NAMI. “Although stigma is a virus that anyone can be exposed to, we do have a cure, and that is compassion and understanding. We need to talk openly and raise our voices, so we can put an end to the fear and shame, and cure stigma once and for all.”

The campaign incorporates a new series of nationwide public service announcements (PSA) featuring NAMI Celebrity Ambassadors from film, television, music, and sports including Utkarsh Ambudkar, Andrea Barber, Maurice Bernard, Corinne Foxx, Clark Gregg, Jamie Gray Hyder, AJ Mendez, Sonya Nichols, Mauro Ranallo and Stolar. The PSA encourages viewers to visit curestigma.org, where visitors can take a brief quiz to see if they “are infected” by stigmatizing beliefs. Visitors will also receive information about how to “spread the cure” and will gain free access to a special emoji/sticker pack for their mobile phones.

“The perception of mental illness won’t change unless we act to change it. So during Mental Health Month, we are asking everyone to join with NAMI to #CureStigma,” said Giliberti.

For additional information about Mental Health Month, to take the CureStigma quiz and to access CureStigma resources, please visit [curestigma.org. 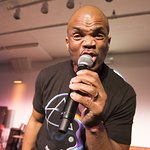 Wednesday night was an evening of awareness and a celebration of those who tirelessly fight discrimination against mental illness, as Darryl "DMC" McDaniels — founder of Run DMC and mental health advocate — was honored by the National Alliance on Mental Illness of New York City (NAMI-NYC Metro) with their “Mental Health Advocate of the Year” award during the organization’s annual “Seeds of Hope” gala in New York City. More →