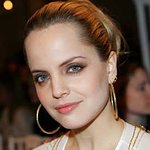 With a swirl of bloody feathers encircling her face, vegan American Woman and American Beauty star Mena Suvari puts the down industry on blast in a brand-new ad campaign for PETA that proclaims, “Cruelty to Animals Gets Me Down. Down Production Is Agony for Ducks. Please Don’t Buy It.”

In an accompanying video spot, Suvari recalls first learning about the way in which birds suffer for down: “I just remember sitting in my home, and I was watching one of the videos showing these geese who were having their feathers ripped out while they were still alive, and they were screaming,” she says. “And it was really, really horrifying.” She immediately threw her feather-filled comforters and pillows in the trash. “I could not accept myself after watching that video, laying my head down on these pillows and going to sleep that night,” she explains.

That’s why Suvari has also sent a letter to Bed Bath & Beyond urging the company to stop selling bedding and other items made with down, and on Friday, she’ll question shareholders on PETA’s behalf during the company’s annual meeting, asking when it plans to ban the cruelly obtained material. Noting that birds used for down are often clamped upside down by workers who violently yank out their feathers by the fistful and hastily sew up their wounds with a needle and thread — and no painkillers — she writes, “Your company already offers significantly more cruelty-free, allergen-free, and down-free options—so ditching down is a feasible and smart next step…. I know Bed Bath & Beyond would be an inspiring model for other businesses if it made this savvy, compassionate change.”

PETA — whose motto reads, in part, that “animals are not ours to wear or abuse in any other way” — has documented that down-industry workers in China left sick and injured chicks, geese, and ducks to die slowly. Dead birds were found decaying in crates and ponds or tossed outside like trash.

Suvari previously teamed up with PETA to call for a ban on fur farming in Estonia.