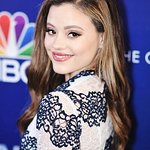 With blood dripping down her face from a fur hood, Charmed star Sarah Jeffery appears in new ad for peta2, PETA's youth division, that proclaims, “No Look Is Worth a Life. Canada Goose Kills.”

“The jackets they make cause a lot of harm to animals,” Jeffery explains in an exclusive video interview. Coyotes used for Canada Goose’s fur trim can suffer in traps for days before they’re shot or bludgeoned to death, and a PETA video exposé revealed that workers at a Canada Goose down supplier rounded up terrified geese who piled on top of one another in an attempt to escape, causing suffocation and death.

“If you love animals and you care for them … don’t wear them, because they have feelings and personalities just like humans do,” concludes Jeffery, who previously starred in a vegan campaign for peta2. “They want to live. They don’t want to die. Think about the choices you’re making, and if you really care for animals, make the right one.”

For a full list of retailers that sell warm, stylish, cruelty-free coats — such as HoodLamb, Save the Duck, and Wuxly Movement — click here.