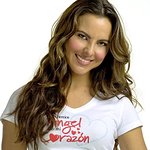 In an accompanying video spot, she points out that nearly every recent mass shooter has had a history of hurting animals.

“In the wake of a mass shooting, we all wish we could have done something to prevent the violence and wonder if there’s anything that we can do to help prevent anything like it from happening again,” says del Castillo in the video. “The link between cruelty to animals and violence against humans is so well established that FBI profilers use reports of animal abuse in analyzing the threat potential of suspects, so we’re asking people not to be silent when they see or hear about someone abusing an animal — and always to report it to the police or PETA.”

PETA — whose motto reads, in part, that “animals are not ours to abuse in any way” — notes that the perpetrators of many mass shootings had histories of abusing animals before turning to hurting humans. Kipland P. Kinkel, who shot dozens of students at Thurston High School in Oregon, liked to hunt small animals. Andrew Golden and Mitchell Johnson both started hunting as children before going on to shoot and kill five people at Westside Middle School in Arkansas. The perpetrator of the massacre in Parkland, Florida, reportedly talked about shooting lizards, squirrels, frogs, and a neighbor’s chickens, and the church shooter in Sutherland Springs, Texas, reportedly bought dogs on Craigslist to use as living targets.