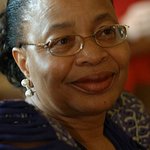 The Elders have expressed their support for the National Health Insurance (NHI) reforms proposed by South Africa’s President Cyril Ramaphosa, and urged all stakeholders to act with ambition and urgency to improve publicly-funded healthcare and build social solidarity.

Graça Machel, Deputy Chair of The Elders, Gro Harlem Brundtland, former Prime Minister of Norway and Director-General of the World Health Organization, and Ricardo Lagos, former President of Chile, met President Ramaphosa in Cape Town to learn more about the NHI Bill currently before Parliament. The Elders also met the Speaker of Parliament and addressed the Portfolio Committee on Health.

As part of their two-day visit to South Africa, the Elders also addressed a public event on NHI at the Charlotte Maxeke Hospital in Johannesburg with Health Minister Zweli Mkhize, attended by patients’ groups, health professionals, business, labour and academics. They then visited the Chris Hani Baragwanath Hospital in Soweto to see for themselves the challenges of healthcare in the public sector.

The Elders said that the NHI reforms offer a critical opportunity for South Africa to improve delivery and accountability in the health system, tackle corruption, and to reduce the inefficiencies and inequalities that currently characterise national healthcare and the private insurance schemes.

Gro Harlem Brundtland said:
“Universal Health Coverage – the principle behind the NHI Bill – is a critical element in any country’s path to sustainable development, social solidarity and equality. We have been encouraged by our meetings with the President, the Health Minister, parliamentarians and medical professionals, and their commitment to improving the health of all South Africans. I urge all stakeholders to show persistence and ambition, and to recall that investment in healthcare is an investment in the economy as a whole.”

The Elders recalled their experiences of introducing health reforms in their own countries and on an international level, often in challenging economic and political circumstances. They said it was important for the NHI reforms to be based on a publicly-funded single-payer system, and to focus on primary healthcare and preventive measures.

Ricardo Lagos said:
“The NHI reforms are an important step towards reducing inequalities, and will give all the people of South Africa the high-quality healthcare they deserve without the debilitating risk of falling into poverty to pay for treatment. I have no doubt that all South Africans, from the President to frontline health workers, have the resilience and commitment to deliver UHC in an accountable, inclusive and fiscally-responsible manner.”

The Elders explore hope, leadership and the COVID-19 recovery in a new series of the Finding Humanity podcast. More →