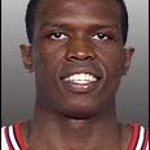 One by one, celebrities have stepped up to take action against the humanitarian crisis in Sudan, and now Chicago Bull Luol Deng can be added to the growing list of sports-stars lending their name to this worthy cause.

On January 6, Deng joined the Chicago Association for the Lost Boys of Sudan to host the ‘Hope for Sudan Celebration’ at Truman College in Chicago. The celebration marked the third anniversary of Sudan’s Comprehensive Peace Agreement, and doubled as the official birthday of the “Lost Boys of Sudan” refugees (immigration paperwork marks January 1 as the birthday of all Sudanese boys). Guest speakers included NBA legend and humanitarian Manute Bol, Mr. Kenneth Elispana (Sudan People’s Liberation Movement Army, Chapter of Illonois) and Dr. Wayne Watson (Chancellor City Colleges of Chicago). Guests were also treated to live music and cultural performances by the Sudanese Womens’ Dance Group and the Lost Boys Musicians-SEDC Team.

“I’m from a nation where my whole lifetime and the life before me have been struggling,” said Deng in USA Today, when asked why it was important to give back to the community. "To be blessed and to do what I’m doing puts a smile on everybody’s face. It’s not just me that’s blessed. It’s all of us. The little things that Americans see every day, we don’t see that often. [Manute Bol’s] time was before me, so I just try to make things special for all the kids from Sudan instead of them hearing negative all the time.

“Playing in the NBA is a dream come true. Charity work is something that is a lot more powerful. I enjoy basketball, but giving back is something a lot of people can’t do.”

Sudanese-born Deng moved to Britain at the age of nine when his family fled civil war. He spent his formative years in the United Kingdom before moving to the States at aged 14 to play basketball on a scholarship.

In addition to the Chicago event, the Arizona Lost Boys Center will hold their Journey of Hope Fundraiser Dinner on February 9th, at the Hilton Scottsdale Resort & Villas. The event’s honorees are two of the original “Lost Boys”, Yai Atem and Jany Deng (no relation to Luol).

“I was seven when we began the walk,” said Atem, referring to his 13-year, 1,000-mile odyssey that took him from the Sudan to Ethiopia, back to the Sudan, and eventually to a refugee camp in Kenya as he and fellow “Lost Boys” escaped a bloody civil war. “We ate tree leaves and drank our own urine to survive one more day.”

Their story is one of hope, and both Atem and Deng have earned U.S. citizenship and received degrees from Arizona State University. “As some of the first graduates of a major university, Jany and Yai are perfect role models of how to get an education while working. And, despite their past, they are optimistic, hopeful, friendly and forward-seeking,” said Ralph Serpico, executive director of the Arizona Lost Boys Center.

The “Lost Boys of Sudan” is the name given by aid organizations to refer to the more than 27,000 boys who were displaced and/or orphaned during the Second Sudanese Civil War, where over 2 million people were killed. In 2001, approximately 3,800 Lost Boys were granted refugee status in the United States. While Arizona has the largest population of Lost Boys, others have settled elsewhere, including Chicago and Florida. In 2007, Brad Pitt produced a documentary about the refugees, and along with Angelina Jolie donated $100,000 towards a medical center for the “Lost Boys” in the Sudan.

Since 2001, over 600 “Lost Boys” have found their way to Arizona and made it their home. The Arizona Center is the only one of its kind in the US, providing a home base for the boys to gather, receive support from one another, and acquire the skills and resources they need to thrive in America. The center is currently seeking donations for silent auctions, live auctions, and raffle prizes for their Journey of Hope Dinner. For additional information, visit the website at http://www.azlostboysbenefit.org.

Currently, there are 135 Lost Boys living in Jacksonville, Florida, which is home to the Alliance For The Lost Boys. Founder and President of the Alliance, Joan Hecht, recently wrote a book, “The Journey of the Lost Boys”, which tells the story of the thousands of boys who fled refugee camps in Ethiopia. It also illustrates the incredible compassion of NBA legend and humanitarian, Manute Bol.

As told by one of the Lost Boys to Joan Hecht: “We were starving, many of us were dying from the lack of food, water and medicine or attacks by enemy soldiers and wild animals. One day, a famous athlete from America came to visit our camp. His name was Manute Bol, and he had been born and raised in Southern Sudan. When he saw us he bowed his head and cried for a really long time. He was very sad to see us that way.” Before leaving, Manute promised to return to help the young children, vowing to tell the world about their suffering and that of his people. A short time later, helicopters appeared in the sky, and landed inside their camp. It was Manute Bol, making good on his promise, bringing food and medicine for the children and reporters to tell their story.

For more information, or to purchase a copy of the book, visit www.allianceforthelostboys.com.