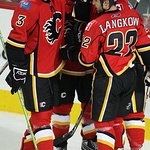 As part of the Juno Awards Weekend events, members of the 1989 Calgary Flames will be lacing up their skates to reunite for a charity game that pits them against a team of celebrity rockers. The Juno Cup, presented by The Keg Steakhouse & Bar, will take place in Stampede Park on Friday, April 4th, at 7:30 p.m. (MST) in Calgary, Alberta. It will benefit MusiCan, the charitable arm of the Canadian Academy of Recording Arts and Sciences (CARAS).

Calgary won its only Stanley Cup championship in 1989, and reuniting members Lanny McDonald, Colin Patterson, Doug Gilmour, and Jamie Macoun will be joined by veteran players Bob Probert, Brad Dalgarno, Mark Napier, Mike Pelyk, Paul Coffey, and Russ Courtnall for a two-period match as part of a weekend of celebrations leading up to the Juno Awards on April 6.

Daring to take the reins of team Rocker is Blue Rodeo singer Jim Cuddy, who has won multiple Juno Awards.

“Each year the musicians are taught a lesson in humility by the NHL alumni – and yet each year, we still think we have a chance,” said Cuddy. “Such is the great game of hockey, and in the end we are bruised and beaten but still smiling. It’s a great time.”

The Rockers, who have yet to defeat the Legends, have amassed an impressive roster of players, including Sloan’s Chris Murphy and Andrew Scott, singer Tom Cochrane, Canadian Idol judge Zack Werner, country singer Shane Yellowbird,
Jay Bodner and Vince Fontaine from Eagle & Hawk, Alex Norman and John Doherty from illScarlett, and Mike Belitsky and Sean Dean from The Sadies.

The celebrity and PGA TOUR professional field that will participate in the 2010 Mike Weir Charity Classic has been confirmed. More →