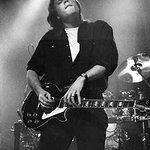 Fans saddened by the death of blind Canadian blues and jazz guitarist Jeff Healey are doing their bit for charity.

Healey, who went blind as a child after contracting a rare eye cancer called retinoblastoma, passed away from the disease on March 2. The guitarist, whose biggest hits included Angel Eyes and a cover of The Beatles’ While My Guitar Gently Weeps, was due to play a concert at Ottawa’s Centrepointe Theatre on March 1. The almost sold-out show was cancelled two days earlier, and thousands of refunds were sent out by theater officials. But fan Ian Burrows has suggested fans donate the refund money to charity.

“My wife Lori and I were both looking forward to seeing him because she’s always liked him,” said Burrows. “Our wedding song was his song Angel Eyes. I had cancer too and it’s not a fun thing to have. I really respect the people who work at the Ottawa Regional Cancer Centre.”

Centrepointe Theatre has sent a letter to patrons sanctioning the idea, and Healey’s family have suggested that fans donate to Daisy's Eye Cancer Research Fund, an organization Healey supported and played many benefit concerts for.

“When we heard about this great idea from one of our patrons it was too late for us [to do anything],” said Karen Scott-Gagne, a spokesperson for the theater. “But it wasn’t too late to put the word out and make the suggestion that people do make a donation if they want to.”

Fans who wish to pay their respects to the musician can leave their comments at www.jeffhealey.com/wishes.