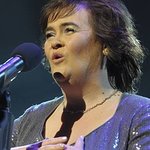 Susan Boyle flipped pancakes for charity during the weekend.

The Britain’s Got Talent star took part in a special cooking event with school children to raise awareness of the Scottish Catholic International Aid Fund (Sciaf) and its Wee Box, Big Change campaign.

This is the second year Boyle has taken part in the campaign, and her mother collected donations for the charity until she died at the age of 91 in 2007. The campaign sees people give up their favorite treats for the 40 days of Lent, and putting their money in a “wee box” for Sciaf to assist in charity work across Africa, Asia and Latin America.

“Sciaf and its work with people living in poverty in developing countries is really close to my heart and always has been,” said Boyle. "I’m happy that I’m now in a position to help them more than I used to be able to.

“It’s going to be really tough giving up chocolate for Lent again, so it was great to tuck into a small feast with the young people today. It’s been great fun and I know every penny raised from the Wee Box, Big Change campaign will help people in need.”

Also supporting the campaign this year are Robert Carlyle and The Proclaimers.

“Sciaf helps some of the poorest people in the world to work their way out of poverty,” said Robert Carlyle. "They give a hand up, not a hand out, providing practical help such as seeds, tools and training so that people can feed themselves and their families, not just today but in the future.

“This Lent I’m giving up coffee and putting the money I save into my WEE BOX. Please join me. Give up something for Lent and put what you would have spent into your SCIAF WEE BOX. Together we will change the lives of some of the poorest people in the world.”

Last year the campaign raised the staggering total of over £900,000 to help Sciaf provide vulnerable people affected by conflict, hunger, poverty, and disease with practical support including seeds, tools and livestock to poor farmers, skills training and small loans to help people generate an income, and healthcare and trauma counselling to those affected by war.

“Sciaf is totally star-struck by the fabulous support the Wee Box, Big Change campaign is receiving from superstars like Robert and Susan,” said the charity’s Head of Communications and Education Philippa Bonella. “We are extremely grateful to them and the many other famous Scots for their support and we sincerely hope it will encourage more and more people to back the campaign. Every penny raised will be spent wisely to maximise the practical support we can provide to people living in extreme poverty overseas.”

Find out more about the campaign here.

Simon Cowell is to be honoured with the 24th Music Industry Trusts Award (MITS). More →