Explore a Minefield shows how mine-clearance has allowed families to return home, land to be used for agriculture, roads to be re-opened, and children to walk to school safely – in short, communities to thrive. It also shows viewers minefields that remain in villages which still require clearance.

Thanks to a grant from Google Earth Outreach, HALO uses Google Earth Pro in thirteen countries for minefield survey, data validation and to produce maps for donors, governments, and other NGOs. Google Earth’s historical imagery allows HALO to provide time-lapse images that clearly show how landmine removal is helping war-torn communities rebuild. Explore a Minefield was funded through a Google Earth Outreach Developer Grant and has contributed to HALO’s mission, “getting mines out of the ground, now.”

Landmines and other explosive remnants endanger some of the world’s most vulnerable people, injuring and killing thousands every year and preventing much-needed development. Founded in 1988, The HALO Trust is the world’s oldest and largest humanitarian landmine clearance organization. HALO has cleared over 414,000 acres of land and removed over 13 million landmines and other explosive remnants of war.

Angelina Jolie first learned about the landmine issue and the work of The HALO Trust while filming Tomb Raider in Cambodia. She has since been an advocate of HALO’s work, visiting and supporting mine removal efforts in a number of war-torn countries including Cambodia, Sri Lanka, and Kosovo.

The tours can be viewed at www.googletour.halousa.org. 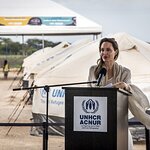 UNHCR Special Envoy Angelina Jolie traveled to Colombia’s border area with Venezuela on Friday to assess the humanitarian response to the exodus of Venezuelan refugees and migrants – the largest and fastest movement of people in Latin America’s recent history. More →