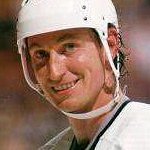 Ice hockey legend Wayne Gretzky is leading the fight for a young single mother battling a chronic disease by donating items to a new online auction.

The 47-year-old Canadian ex-hockey player – once named the “greatest player of all time” in Total Hockey: The Official Encyclopedia of the NHL – has put a signed jersey up for auction, and has been joined by a raft of current and former all-stars and Hall of Famers including Mario Lemieux, Gordie Howe, Brendan Shanahan, Steve Yzerman, Patrick Roy and Evgeni Malkin. Green Bay Packers quarterback Brett Favre has also gifted a signed picture to the cause.

The proceeds from the auction will go to Katie Thomas, a 33-year-old geneticist from Denver, Colorado, who was diagnosed with Non-Hodgkin’s Lymphoma in 2007. Unresponsive to traditional treatment, Katie is now showing progress in a unique clinical trial that is not covered by her health insurance, and the money raised will go towards her continued treatment.

The auction can be accessed via eBay, or to learn more about Katie and how you can help, visit www.helpkatiefight.org.