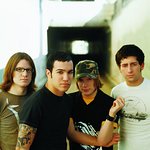 Fall Out Boy is back on the radio and prepared to light up arenas across the U.S. starting in September — and in celebration, peta2, PETA's youth division, sat down for a Q&A with drummer Andy Hurley about healthy eating, being a role model for young people, his long-ago decision to go vegan, and more.

The new podcast just went up on peta2.com, where visitors can also find free vegan recipes, enter to win concert tickets, and more.

In the interview, Hurley talks about how vegan eating has changed over the years. “It’s just unbelievable,” he says. “When I [first went] vegan, you had to walk 5 miles uphill in the snow to get food. Now you just go to any grocery store, and they have Daiya cheese or Gardein products or tons and tons of stuff.” And technology has changed how he interacts with and influences fans. “I have a lot of kids on Twitter who have said I’ve inspired them and influenced them to be vegan,” he says. “When you realize that you can change yourself in such hugely important ways, you start to realize, what can’t you change?”

And there are plenty of reasons to make that change: In addition to the health benefits that Hurley discusses in his interview, vegans save more than 100 animals a year from immense suffering on factory farms, in slaughterhouses, and on the decks of fishing boats. Going vegan is also one of the best ways to reduce your carbon footprint, as raising animals for food is one of the leading causes of greenhouse-gas emissions.

Hurley is part of a long list of musicians, artists, and other celebrities — including Davey Havok, Rise Against, Serj Tankian, Dave Navarro, The Dillinger Escape Plan, and tattoo artist Megan Massacre — who have teamed up with peta2 to promote animal protection.