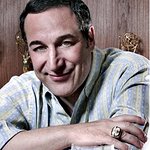 He’s terminally ill, but that hasn’t stopped a maverick Hollywood philanthropist from flying to icy St. John’s to make an offer he hopes sealers can’t refuse.

Simpsons Producer Sam Simon and PETA Honorary Director Pamela Anderson made a surprise visit to the Canadian Sealers Association on Tuesday to offer $1 million to the group if it facilitates and achieves a long-buzzed-about government buyout of the failing international seal trade.

Simon’s offer comes on the heels of the World Trade Organization’s decision last month to uphold the EU’s ban on seal-fur imports.

“I have flown from Los Angeles to St. John’s to hand-deliver my offer of a $1 million bonus payable to Canadian sealers if your association facilitates a government buyout of the fading East Coast seal trade,” Simon wrote in a letter that he delivered, alongside Anderson, to Canadian Sealers Association President Eldred Woodford. "Unlike recent government seal bailouts benefiting a foreign-owned fur processor, this money would go directly to Canadian sealers.

“I make this offer in the wake of last month’s WTO ruling to uphold the EU’s ban on seal imports. With bans firmly in place across Europe, Russia, the U.S., and other countries, the writing is on the wall: The seal trade is finished. Leaders as diverse as President Obama and Vladimir Putin embrace this change, yet Canadian politicians remain too timid to initiate a buyout for fear of upsetting swing voters in eastern Canada—and because they don’t seem to care about individual sealers. That’s why I’m appealing to you as a trade leader to break the ice and prompt a buyout like those that helped asbestos miners, tobacco farmers, and workers in other collapsed industries.

“CBC commentator John Furlong reported that a Costco in St. John’s made more money in a weekend than the entire seal trade did in a year. “But let’s not let it limp along like this. It’s not fair to the tradition of sealers, it’s not fair to Newfoundlanders, and it’s not fair to the environment,” he wrote, suggesting that the time has come to “pull the plug.” Many Canadians echo this thought, including my traveling companion, Pamela Anderson. We’re here with an incentive to help workers and spare animals.

“Here are the details of my offer:

“It seems in the best interests of sealers that the CSA sit down with the Ministry of Fisheries and Oceans and other industry stakeholders to demand an acceptable buyout program rather than lose everything. Your workers will get a million-dollar bonus if you do it now.”