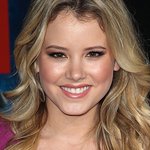 This week a few awesome, young stars participated in DoSomething.org and Aéropostale’s Teens for Jeans campaign and donated a few pairs of their gently used jeans to local homeless youth.

Teens can donate their jeans to at their local Aéropostale store between now and February 16th. For more information, people can visit TeensforJeans.com.

“The Teens for Jeans campaign continues to build momentum,” says Scott Birnbaum, Senior Vice President of Marketing and Ecommerce at Aeropostale. “In 6 years we have collected and donated over 3.5 million pairs of jeans, and Aeropostale remains committed to making a difference for teens in need.”

Almost 40% of people experiencing homelessness in the United States are under 181. One item they commonly request in homeless shelters is a pair of jeans. Why? Jeans are comfortable in any season and can be worn multiple times between washes. Plus, for a teenager without many belongings, wearing a pair of jeans can provide a sense of security. More →