World class rockers and sports stars from Down Under have donated items to a new online auction benefiting an organization that helps disabled and disadvantaged individuals develop their skills and abilities to contribute to their communities.

Past and present members of the All Blacks – New Zealand’s national rugby team – have stepped up to the mark with Olympic medalist Sarah Ulmer and Crowded House's Neil Finn to take part in the auction, which is rasing money for the Gracelands Trust, an organization based in the North Island of New Zealand.

Founded and developed by Robyn Klos, the Gracelands Trust has developed from a small service supporting people in Te Awamutu to now offering programs throughout the greater Waikato region. It is based on a personal optimistic philosophy that it is possible to harness professional skills and knowledge with community resources and goodwill to provide a people-centered service, where everyone benefits.

The auction includes items such as a Finn Brothers poster signed by Neil and Tim Finn – both born in Te Awamutu – as well as an All Black jersey signed by Colin Meads, a rugby ball signed by Zinzan Brooke, and a cycling shirt signed by Sarah Ulmer.

Anybody interested in the auction – which can be accessed via TradeMe – had better be quick… it ends August 26 and 27. 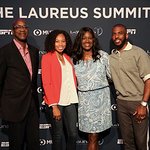