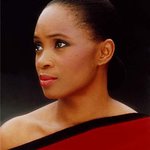 Hendricks visited the West African country, which has one of the biggest stateless populations on the continent, last month to raise awareness in the lead-up to the mid-September global launch of UNHCR's 10-year campaign to end statelessness.

“A stateless person is someone who is like a ghost – they are invisible to all the things we take for granted,” said the Goodwill Ambassador. “Imagine how it feels to not exist in the eyes of the law – to not be able to go to school, take an exam, open a bank account, travel, get married or register your children’s birth. All doors are closed and this is deeply frustrating – limiting your life and your family’s ability to move forward.”

Based on data from the Ivoirian government, UNHCR estimates that 700,000 people are stateless or of undetermined nationality in the country. The high number is due to several factors: After Independence in 1960, changes in the legal code prevented the descendants of immigrants from acquiring Ivoirian citizenship. During the 2002 civil war and the 2010-2011 post-electoral crisis, the destruction of civil registries and the loss of individual documentation made it very difficult for people to prove their citizenship. Abandoned children are not covered by national legislation and therefore do not have Ivoirian citizenship. In addition, tens of thousands of children are at risk of statelessness because they have never been registered at birth and therefore cannot prove their national affiliation.