On Friday August 8, 2014, Blurred Vision took to the streets of downtown Toronto, with a flat bed truck equipped with a mobile live stage, and their brand new song and campaign titled “No More War”.

Not only did the band plan to share their new single with the thousands of Torontonians and tourists walking the streets, but to also begin to spread their campaign based on the song, that is rallying fans to create the biggest anti war petition in history.

Their first stop was the CBC building at the foot of Front and John, where Blurred Vision and their “NoMoreWarMobile” stopped to perform the song for passersby, and encouraged them to sign the giant white sheet (petition) that adorned the truck and simply read “No More War”.

The details can be found on the new Facebook page Blurred Vision created called “No More War Campaign”, but it’s quite simple. The group are encouraging fans and peers around the world to write “No More War” on any canvas from a sheet of paper to a bed sheet, and get as many people to sign the simple petition. Then fans can upload the picture to the campaign’s Facebook page with how many signatures they got and where they’re from. It’s that simple!

The band plan on the campaign being an ongoing petition that with every million signatures, will be delivered to the United Nations and other major nation’s governments.

The official video for the song will go into production at the end of August with long time friend, collaborator and acclaimed filmmaker Babak Payami. Blurred Vision’s debut album “Organized Insanity”, produced by multi platinum selling producer Terry Brown, is set for release on October 7, 2014. 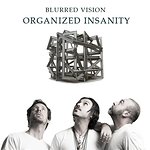