The cast of Downton Abbey has embraced ‘water bottle-gate’ by posing for a picture to promote WaterAid's work.

A publicity still released last week hit the headlines when a plastic water bottle was spotted in the corner of the picture. The official photograph of The Earl and Lady Edith was cropped and used during the launch of the new season, but it was when an uncropped version of the image worked its way onto the internet that it sparked a global press frenzy.

An itv spokesperson said, “After seeing the reaction the picture caused earlier this week, the cast and crew came up with the idea of turning some of this attention towards an issue around water that really matters. They hope that by posing for this picture they will be able to raise awareness and amplify the work of international charity – WaterAid.”

Barbara Frost, Chief Executive of WaterAid, said: "It brought a really big smile to my face when the cast of Downton Abbey said that they wanted to support WaterAid’s work. How fantastic that the attention created over one water bottle ends up benefiting some of the world’s poorest communities through access to safe, clean water today.

“Every pound and penny WaterAid receives will be matched by the UK Government, which means we can reach twice as many people with desperately needed clean water and sanitation.

“Thank you so much to the cast and the producers of Downton Abbey.”

If you enjoyed the photo, donate online or text WATER to 70007 to donate £3, to help get clean water and safe toilets to the world’s poorest communities. 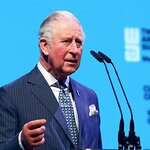 Earlier this week, The Prince of Wales attended WaterAid's Water and Climate Summit to discuss the impacts of climate change on access to drinking water. More →