The role is one for which McGraw is ideally and uniquely suited: she is a Girl Scout alumna, a former Girl Scout troop leader, and a longtime supporter of programs that benefit women and children.

As someone who has participated in Girl Scouts as both a girl member and an adult volunteer, McGraw feels strongly about the positive effect Girl Scouts has on girls, and will now lend her voice and influence to the organization’s mission to enable girls across the country to reach their greatest potential and be empowered to lead wherever they live, work, and play.

“I cannot tell you how much this means to me,” says McGraw. “I was a Girl Scout growing up my entire life, and was a Brownie troop leader before I even had children. We all must be diligent and passionate in our support for girls and it begins today.”

McGraw’s first order of business in her new role is to issue a call to action to all adults – women, men, young professionals, college students, and more – to consider volunteering. Currently, there are upwards of 30,000 girls on waitlists nationwide who want to join the organization but cannot due to a shortage of volunteers. Each new volunteer allows at least five girls to be taken off these lists and join the fun of Girl Scouts.

“Girl Scouts is lucky to have such a passionate and notable alumna and former troop leader come back to us in this new capacity,” says Chávez. “Robin is an example of what we need from more adults – a commitment to our nation’s girls. As a volunteer, she had the unique opportunity to positively impact young girls’ lives, and as we work together to increase the number of volunteers so more girls can become Girl Scouts, she again will have a direct impact on building girls of courage, confidence, and character, who make the world a better place.”

McGraw worked with Girl Scouts of the USA to produce a public service announcement (PSA) in which she and Anna Maria Chávez, surrounded by girls from Girl Scouts of Greater LA, urge folks to visit www.girlscouts.org to learn how to become a volunteer.

In addition to supporting volunteer efforts, McGraw will also be a featured speaker at the 2014 Girl Scout Convention in Salt Lake City, Utah, and will moderate a “Conversation of Consequence” panel on leadership.

Founded in 1912, Girl Scouts of the USA is the largest girl-serving organization in the United States, with more than 3.2 million girl and adult members worldwide. The organization’s impact is evident in its alumnae: the majority of female business owners, 60 percent of women in the House of Representatives, 59 percent of women in the US Senate, and nearly all female astronauts were Girl Scouts.

Robin McGraw launched her own charitable foundation, When Georgia Smiled: The Robin McGraw Revelation Foundation, in October 2013 with the announcement of the foundation’s inaugural program, The Aspire Initiative, an online domestic violence education and prevention curriculum. The program’s corresponding smartphone app has had more than 130,000 downloads and was recognized on Capitol Hill by the National Health Collaborative on Violence and Abuse as one of the two apps in 2014 most beneficial in the fight to end domestic violence. 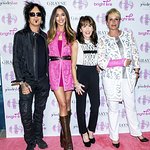 How2Girl, iHeart radio host and DIY expert Courtney Sixx put her new role as an official ambassador to www.BrightPink.Org to good use this weekend when she partnered with CEO of www.MKGrayse.Com Kelly Gray in order to raise funds and awareness for breast and ovarian cancer. More →