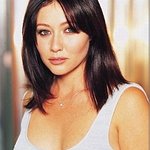 Actress Shannen Doherty, best known for her starring roles on the hit television series “Charmed” and “Beverly Hills 90210,” has just returned from a trip to Taiji, Japan where she served as a Cove Guardian with Sea Shepherd Conservation Society, documenting the brutal drive hunt and slaughter of dolphins in Taiji’s infamous killing cove.

On September 20, Doherty bore witness as the hunters quickly drove a pod toward Taiji Harbor and netted the panicked dolphins into the cove. Doherty live streamed the hunt along with Sea Shepherd’s Cove Guardians, shining a worldwide spotlight on what the hunters try to keep hidden behind tarps: the capture and slaughter of intelligent, socially complex dolphins and small whales.

The entire pod — the fourth pod of Risso’s dolphins to be driven into the cove thus far this season — was quickly slaughtered, except for one juvenile calf who was kidnapped and sold into what amounts to slavery in the captive industry.

Shannen Doherty said after witnessing the brutal hunt, “I sit at home and I watch the live streams from Sea Shepherd and I thought that I was prepared, and there is absolutely nothing that can prepare you because you’re here and there’s an eeriness to it. Especially after they’ve been slaughtered — the lapping of the water, the dead calm, people start walking away. It’s eerie. And you just wonder how they [hunters] are able to go to bed at night. …I think being here rocks even the most hardened human being, because it is just atrocious.”

Speaking about how the dolphins suffer and the lengths to which the killers go to hide the suffering from the world, Doherty said: “It is a completely undignified, undeserving, horrific death, and they [the hunters] know it because they block us and they prevent us from showing the brutality, the completely inhumane slaughter of these creatures that are honestly a gift from God, and what are we [as humans] doing?”

In addition to witnessing the brutal hunt at the cove, Doherty also visited Taiji Whale Museum — one of three captive facilities in Taiji — and live streamed to viewers around the world as she showed the dismal living conditions of the captive cetaceans, including a rare albino bottlenose calf captured from a pod of more than 250 bottlenose dolphins last year. The calf, named “Shoujo” by Sea Shepherd Founder, Captain Paul Watson, was kidnapped from her mother, presumed amongst the members of the pod who were slaughtered, and was the first of the pod to be captured for captivity, as the killers and trainers instantly recognized the rare albino dolphin as a lucrative find for the captive industry. Some estimate her eventual sale could fetch $500,000 for the killers.

“The brutality of Taiji’s hunt does not end with the dolphins and whales slaughtered in the cove. The suffering continues for those who are taken from the ocean and imprisoned for captivity,” said Shannen Doherty. “It was emotional to join the Cove Guardians at Taiji Whale Museum, and see Shoujo and the other dolphins in these small, barren tanks where they will spend the rest of their lives. They’ve already endured so much, witnessing the deaths of their families.”

Doherty and the Cove Guardians were outside Taiji Whale Museum as the Risso’s dolphin taken captive from the pod slaughtered earlier that day, was transferred there from the captive pens in Taiji Harbor. With no regard for the well being of the dolphin they just captured because it is a “replaceable commodity,” the dolphin trainers cruelly said that unless the Cove Guardians stopped filming, they would hold the calf in the tiny, dark crate in which it was being transported until closing time, when there would be no choice but to leave. Though the Cove Guardians were acting within the law by being present and documenting, the Sea Shepherd volunteers opted to stop filming and leave the location so that the suffering of the dolphin would not be prolonged. The trainers have once again shown their heartlessness, as well as the undeniable connection between the slaughter of dolphins in Taiji and the captive industry.

After witnessing the brutality of the dolphin drive hunt on Sept. 20, the following day Doherty was elated to be able to live stream the hunters’ boats as they returned to harbor empty-handed from their hunt. A ‘blue cove’ day was called and it was the perfect way to end her brief but busy visit.

For a staggering six months of each year – from September until March – entire family units, or pods, of dolphins and small whales at a time are driven into Taiji’s killing cove. Banger poles are hit against the side of the hunting boats to create a “wall of sound,” disorienting the sound-sensitive marine mammals and making it nearly impossible for them to escape the drive. When a large pod is captured, killers and trainers will work side-by-side to select the “prettiest” dolphins or whales (those without visible nicks or scars) for captivity. It is the multi-billion dollar global trade in captive cetaceans that funds the slaughter. The Cove Guardians have repeatedly documented that the captive selection process occurs simultaneously to the slaughter, as those who are not killed for human consumption are sold for captivity. If there are pod members remaining, they are driven back out to sea in a drive just as stressful as the drive into the cove. Most are juveniles with little to no chance of survival without the protection of their mothers. Some face death by starvation, while others may fall prey to predators.

Sea Shepherd’s Cove Guardians are the only group on the ground in Taiji every day throughout the entire six-month hunting season, documenting and live streaming every capture and every slaughter for the world to see. The 2014-2015 season marks the fifth consecutive year of Operation Infinite Patience, and the Cove Guardians will not stop returning to Taiji until the slaughter ends.