Father Ted and IT Crowd Graham Linehan writer has created a campaign film to support Amnesty International calls to decriminalise abortion in Ireland.

He and wife Helen underwent a termination procedure due to a fatal foetal abnormality while living in England – in Ireland this would have been illegal.

Irish writer and director Graham Linehan and his wife Helen are joining forces with Amnesty in a campaign to bring attention to Ireland’s outdated and dangerous abortion laws.

Graham has produced a short video for use in Amnesty’s campaign entitled ‘Chained’ which highlights the traumatic and often deadly implications of the law that prevents women from seeking an abortion in the country, even where the pregnancy is a result of rape or incest, or when the foetus has a condition that means it will not survive outside of the womb.

Graham said: "Ireland’s abortion laws are among the most restrictive and punitive in the world and that is why it was important to me to make this film.

“There are many reasons why people might need an abortion. My wife, Helen, and I, had our own reasons, and although we had excellent care in the UK, it’s shocking to me that we would have had a very different experience in my home country.

“Had we been in Ireland when we found out that the foetus Helen was carrying would not survive, she would have been forced to carry the baby to term. Getting the same procedure that she received in the UK would have led to her receiving a 14 year jail term.”

Graham and Helen found out their baby had acrania (a condition that means the skull has not fully formed over the brain) when they went for their 12-week scan. While the foetus would possibly continue to grow while in utero, they were told that it would not survive for more than an hour after birth.

Helen said: “It was absolutely devastating. And when faced with something like that, the very least you should be able to expect is proper medical care allowing you to move on. It is unthinkable that, had we been living in Ireland, I would have been forced to carry the pregnancy to term and give birth to a baby that would be dead within minutes.”

Any woman who has an abortion in Ireland faces up to 14 years in prison, and women are only allowed to legally terminate a pregnancy when their life is deemed to be in immediate danger of death.

As a result many girls and women are forced to travel overseas to have the procedure, or risk an unsafe, illegal abortion.

Grainne Teggart, Amnesty UK Campaign Manager said: “Women are suffering unnecessarily under Ireland’s repressive abortion laws. Thousands of women are forced to leave Ireland every year to access healthcare services to which they are entitled. It’s time Irish political leaders stopped turning their backs on women and committed to a referendum to repeal the 8th amendment.” 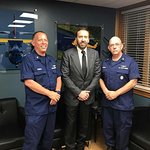 Nicolas Cage was in Mobile last week, and in between filming his new movie “Between Worlds” he found time to visit the U.S. Coast Guard Aviation Training Center. More →