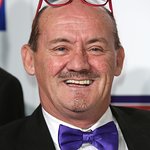 Mrs Brown’s Boys star Brendan O'Carroll has donated $50,000 to a grieving family while on tour in Australia.

The comedian was appearing on a current affairs show when he became aware of the story of Sarah Paino, who was killed in a horror car crash in Hobart, Tasmania, while 32 weeks pregnant.

The 24-year-old mother was killed when teenage joyriders in a stolen car smashed into her vehicle, but doctors were able to save her unborn son.

When Brendan heard the story, he immediately stepped up to help Sarah’s partner, Daniel Stirling, her 2-year-old son and her newborn son.

“I was really touched by the piece you did on Daniel (Stirling) in Hobart,” Brendan told hosts of the show The Project. "We’re very much a family so if it’s okay with you guys, we as the Brown family would like to donate 50 grand to that fund.

“We’re travelling out to do the show in Hobart and we hope to make you guys smile – but in the meantime Hobart’s been really good to us and we’d want to get a chance to be good back.”

To find out how you can donate to the cause, click here.