Devo Donates Royalties Of Whip It To PETA 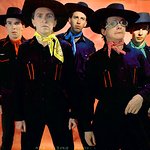 Devo have donated royalties from their classic hit “Whip It” to PETA to help launch a campaign to free tigers, lions, and other big cats from the circus, where they are routinely whipped.

The Ohio rock icons made the donation in advance of today’s Ringling Bros. and Barnum & Bailey Circus show at Cincinnati’s U.S. Bank Arena, where the captive big cats will be forced to perform.

Says Devo: “As Ringling Bros. relies on the fear of whips to force lions and tigers to perform, Devo is pleased to make a grant to PETA from the royalties of ‘Whip It’ for their campaign to free big cats from this abuse. We hope that all circuses will continue to evolve by spotlighting human creativity rather than degrading animals.”

After years of a public outcry, Ringling Bros. made global headlines by announcing that it would retire elephants from shows in May 2016. With the elephants on the way out, PETA is refocusing its campaign on freeing the big cats. Their recent exposé shows an animal trainer boasting that he could carve his initials in a tiger with his whip.