Recently, Golden State Warriors point guard and two-time NBA MVP, Stephen Curry, took the stage at TechCrunch Disrupt San Francisco for the first time to talk about his passion projects including his work fighting malaria with the United Nations Foundation's Nothing But Nets campaign and his involvement with tech startup Slyce.

For the fifth consecutive year, Curry announced he will continue his Three for Three Challenge to support Nothing But Nets, donating three life-saving bed nets for every three-pointer he makes during the 2016-2017 NBA season. The Golden State Warriors confirmed today they will match his donations. Curry also encouraged TechCrunch attendees and fans to check out the new trailer of Nothing But Nets’ virtual reality film premiering later this fall which immerses viewers in the life of a 11-year-old girl living in a refugee camp who faces the daily risk of contracting malaria.

Every two minutes, a child dies from malaria. Nothing But Nets works closely with its UN partners across sub-Saharan Africa to ensure vulnerable populations including children, refugees, and families displaced by conflict are protected from this deadly disease.

“We’re fortunate that here in this country we don’t have to worry about malaria,” said Curry. “Other families aren’t so lucky – we can all help save lives one net at a time.”

Curry also took time to talk about his involvement in the tech startup Slyce, a content management platform empowering brands and influencers to efficiently communicate to their customers and fans through content distribution and analytics, created by friend and former Davidson roommate and teammate Bryant Barr.

Directly following his onstage appearance, Curry met with donors and supporters of Nothing But Nets to thank them for their contributions to protect families from malaria at a fundraiser co-hosted by TechCrunch. Sports journalist Rick Reilly, who helped found the campaign ten years ago, held a brief Q&A with Curry about what it was like to visit Tanzania and hang nets in refugee homes.

“We went to Tanzania three years ago to help Nothing But Nets deliver tens of thousands of nets,” said Reilly. “I’ve never witnessed a more humble and caring athlete dedicate so much time to families.”

Today, there are more than 50 million refugees and families displaced by violence around the world – and 60 percent of them live in areas where malaria is transmitted. Malaria is a major threat to refugees – it is a leading cause of illness and death in many African countries, including those where Nothing But Nets and its UN partners work. Last year, the campaign launched The Million Nets Pledge to protect refugee families from malaria with one million nets by 2016. This ambitious two-year goal aims to raise $10 million to protect vulnerable people fleeing violence, particularly in Central Africa.

“Together with our UN partners and programs like the Global Fund to Fight AIDS, Tuberculosis and Malaria, and the President’s Malaria Initiative, we’ve made amazing progress against malaria,” said Margaret Reilly McDonnell, director of Nothing But Nets. “It’s really exciting that we could be the generation to end malaria for good.”

Now in its tenth year, the Nothing But Nets campaign boasts hundreds of thousands of supporters – from students to athletes to entertainers – who all help to protect families from the threat of malaria.

Fans can get involved to help Stephen Curry and Nothing But Nets in the fight against this deadly disease by visiting NothingButNets.net/StephenCurry to send a net and help save a live, or NothingButNets.net/VR to see the trailer for the campaign’s new virtual reality film and sign up for more updates. 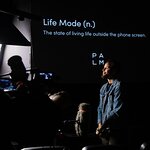 Going to the movies with Stephen Curry is a little bit different than your typical trip to the theater. Just ask the 40 students of East Oakland Youth Development Center, whom Stephen surprised at a local theater in Oakland. More →