Actor Kimberly Elise (Diary of a Mad Black Woman, The Manchurian Candidate) has penned a letter to the CEO of Kraft Heinz, writing as one parent to another to urge his company to offer families a healthier and more compassionate BOCA Foods by dropping dairy from the brand.

Sending her powerful note, the mother of two joins a Compassion Over Killing campaign that in 2010 prompted Kraft Heinz to remove eggs from the meatless BOCA line. Though the promising step impacts the lives of millions of hens, and new vegan BOCA falafel bites recently debuted, cruel dairy remains in the majority of BOCA products.

Elise writes to Kraft Heinz CEO Bernardo Hees, “I’m reaching out as a fellow parent to encourage you to make healthy, sustainable, and kinder foods accessible to families like mine everywhere by dropping dairy from your BOCA brand.”

“More and more moms are choosing to forego dairy products and feed their families vegan food, but unfortunately, we can’t enjoy most of BOCA’s product line — yet,” Elise adds. “In offering a veggie burger, you’ve already recognized that consumers want less violence and more nutrition on their plates. Please, catch up with your competitors and offer a 100% vegan BOCA brand.”

Once a household name, BOCA now trails behind its massively successful competitors like Beyond Meat that are already 100% vegan. As Elise points out to Hees, the soaring plant-based market is expected to reach $3.5 billion by 2024. A recent Nielsen report even found that plant-based sales are outpacing those of other foods and beverages.

“Compassion Over Killing is thrilled to team up with Kimberly Elise, who is shining a spotlight on the cruelty of dairy and lighting the way for Kraft Heinz to seize a golden opportunity: serving the thousands of consumers hungry for a vegan BOCA brand,” says Laura Cascada, Director of Corporate Outreach at Compassion Over Killing.

More than 46,000 people have signed COK’s petition calling on Kraft Heinz to kraft a better BOCA by ditching dairy.

Time and again, investigative videos have exposed rampant animal abuse in the dairy industry, which relies on a systemic cycle of exploitation of gentle cows and their calves. As Elise puts it, the heartbreaking truth of dairy is “a reality far removed from the ‘happy’ dairy cow we see in children’s books.” 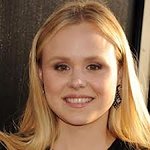 Stars Call On McDonald’s To Stop Animal Cruelty May 23, 2019

Days before McDonald’s annual shareholder meeting on May 23, a cast of 25 celebrities is urging the company to address its animal cruelty problem in a More →