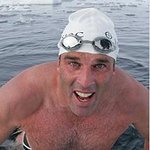 When a man who has swum in the world’s coldest waters, and whose nickname is the Human Polar Bear, says that he’s about to embark on the toughest swim of his career, it’s time to sit up and take notice.

Endurance swimmer Lewis Pugh has pushed his body to the limit to raise awareness of threats to our oceans and now he is doing it again — preparing to swim the length of the English Channel in just swimming trunks, goggles and a cap to urge governments to commit to protecting 30 percent of the world’s oceans by 2030.

Pugh, UN Environment’s Patron of the Oceans, set off from Land’s End in Cornwall last week and will swim 560 km (350 miles) to Dover in Kent over 50 consecutive days.

He is aiming to swim five hours each day, averaging around 10-20 km (6-12 miles) each day. He has been training in the cold waters off the Falkland Islands and then South Africa, where he lives, swimming around 7 km each day. But this challenge is as much about the mind as the body.

“This is going to be a monumental swim,” he said. “This swim is the longest swim I will ever have attempted and it will require a completely different mindset … You can get your body right but ultimately, it’s going to be the heart that gets me to Dover. It’s going to be an enormous physical journey and an enormous mental journey.”

Around 1,800 people have swum across the Channel since Captain Matthew Webb first completed the challenge in 1875. But no one has attempted to swim the length in just swimming trunks, goggles and a cap.

The Long Swim marks the start of a global Action for Oceans campaign to urge governments to protect 30 per cent of the world’s oceans by 2030. Pugh, who supports UN Environment’s Clean Seas campaign, said he had seen horrific changes in the world’s oceans over the past three decades.

“I’ve been swimming for 30 years, which is a long time in a human life but in ecological terms it’s such a short period of time, and I’ve literally seen the ocean change. From the Arctic to the Antarctic and the coral reefs, everywhere, I’ve seen the oceans change,” he said.

Pugh, who was born in Plymouth, wanted to bring this urgent message home with his latest challenge. His aim is also to put pressure on the British government to establish more secure Marine Protected Areas around the United Kingdom and its overseas territories. He noted that only a tiny fraction of British waters are fully protected.

“The main thing I’m campaigning for now is that the United Kingdom really grabs this opportunity because … these are not problems that you can fix next year or the year after … This is not about protecting future generations. It’s about protecting our generation. That’s the speed at which this is happening now. I’m urging the UK government to become an ocean champion, to really lead the world in protecting these great and important areas,” he said.

Professor Callum Roberts, a marine conservation biologist from the University of York who was a scientific adviser to the TV series Blue Planet II and who also attended the Long Swim launch, said Britain needed to do more, noting that the UN’s Sustainable Development Goal 14 calls for all nations to conserve at least 10 percent of their seas by 2020.

“A tiny fraction of our seas is protected according to the best standards of international practice. A small fraction is protected from the most damaging of fishing activities but most Marine Protected Areas don’t qualify against international criteria for management and protection, which means that instead of having exceeded the UN target of 10 percent protection, we are way behind that curve as yet,” he said.

“We need to afford protection to whole ecosystems and sites rather than focusing on bits of them and low levels of protection. We should properly resource that management and ensure that there is sufficient surveillance and enforcement and instead of setting targets for nature to fulfill, let’s give nature the protection it needs and let it dictate what comeback is possible. By doing that we will have an internationally successful network of Marine Protected Areas that will be at the forefront of conservation practice, not just in Europe but in the whole world,” Roberts said.

Pugh, who played a key role in negotiations to establish the largest Marine Protected Area in the world in the Ross Sea off Antarctica in 2015, had a direct message for Britain’s new Foreign Secretary Jeremy Hunt, who was named to replace Boris Johnson after his resignation this week.

“The most important thing now for the new foreign secretary is to properly protect the South Sandwich Islands. This has gone on far too long,” he said, describing the British Overseas Territory in the Southern Atlantic as the “Serengeti of the Southern oceans”.

Pugh, who was the first person to complete a long-distance swim in every ocean in the world, undertook his first long-distance challenge when he was 17, swimming from Robben Island to Cape Town. In 2007, he did the first swim across the North Pole to highlight the melting of the Arctic sea ice, and in 2010, he swam across a glacial lake on Mount Everest to draw attention to the melting of glaciers and the impact of reduced water supplies on world peace.

During the Long Swim, he will sometimes hug the coastline and he hopes that members of the public will join him, saying he wants this to be “A People’s Swim”.

Marine conservation charity Surfers Against Sewage will organise beach cleans along Pugh’s route, seeking to mobilise support for their efforts to protect beaches and seas. The charity has recently launched a new international campaign called Plastic Free Communities, which aims to encourage individuals, businesses and local governments to reduce their collective plastic footprint.

Pugh knows the swim will take a heavy toll on every inch of his body: he will endure chafing under his arms, his tongue might swell and there is the very real risk of contracting hypothermia. If he manages to swim around six hours a day, he will need around 10,000 calories. “I’ll spend a lot of time eating and swimming,” he said.

And then there are the headland tides, the whirlpools, the eddies and the jellyfish, which are clustered between Weymouth and Plymouth after recent warm weather.

“There is no easy way to deal with jellyfish, especially if you swim at night,” he said.

However, the biggest feat may be keeping the faith that he can make it to the end. 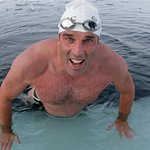 Pioneer swimmer and ocean advocate Lewis Pugh was today unveiled as the United Nations Environment Programme's Patron for Oceans as he prepares to embark on an epic circumnavigation of the globe. More →