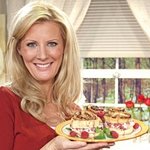 Valpak, one of North America’s leading direct marketing companies, announces the launch of a powerful collaboration that puts a spotlight on the fight to save lives and end breast cancer.

In partnership with Susan G. Komen for the Cure, and renowned television chef and breast cancer survivor Sandra Lee, Valpak will turn its monthly iconic blue envelope pink in support of the 1 in 8 women in the U.S. who will develop breast cancer at some point in her lifetime and the countless loved ones affected by the disease.

Valpak’s pink envelope will highlight celebrity chef Sandra Lee, a breast cancer survivor and advocate for women’s health, as a “More Than Pink Hero.” The pink envelope will introduce a related sweepstakes, inviting consumers to nominate a hero who has taken action in the fight against breast cancer. Throughout the month of October, Valpak will share the submitted stories and ultimately 25 lucky winners will each receive a set of pink KitchenAid appliances in support of Cook for the Cure. The set includes a stand mixer, blender, 2-speed hand blender and a 5-speed hand mixer with a total retail value of over $800.

“Valpak is proud to partner with Susan G. Komen and Sandra Lee for this powerful initiative as we inspire others to join us in the fight against breast cancer,” explains Mike Davis, CEO for Valpak. “This initiative is personal for Valpak as many employees are affected by the disease in some way and we are determined to stand up and help find a cure. This cause month envelope is hopefully the first of many, as we are determined to make a big impact on a nationwide cause at least once per year.”

The striking color of the pink envelope and its call to action to donate are only the beginning of Valpak’s commitment to helping raise funds and inspiring others to join the fight. In 2018, Valpak corporate will donate $50,000 to Komen regardless of sales. In addition, the company’s nationwide salesforce of over 600 hit the streets over the past few months to encourage local advertisers to join the fight by making donations. In turn, Valpak is recognizing the local allies online and in the Valpak envelope with a special pink-bordered ad. Valpak’s Media Sales Consultants reached over 3,000 local advertisers and together they raised over $135,000 in donations in the fight to save lives.