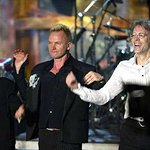 With some of the most accomplished percussionists on earth backing them up, Hunger Relief International (HRI) is launching Beat Hunger, a multi-media awareness and fundraising campaign, on October 18th, to benefit Haitians living in extreme poverty.

Founder of HRI, Rachel Zelon, said, “Hunger is on the rise around the world. Beyond the life and death scenarios, hunger prevents kids from developing and thriving to their full capacities. Haiti is our close neighbor – we at HRI are absolutely committed to help those impacted by extreme poverty, a group numbering in the millions. Our Haitian team works with the goal of ending chronic hunger and resolving food insecurity for the long term.” On the campaign, Zelon added, “We are extremely grateful to have assembled a wonderful group of musicians to bring attention to the ongoing difficulties facing Haitians.”

Stewart Copeland commented, “This is the proper use of a megaphone … we’re banging up a noise to get society to focus on what can be done to beat hunger on this earth.”

Dame Evelyn Glennie stated, “… the fact that the drum is universal and can stir people’s sense of well-being is a great way to capture attention for this cause!”

Beat Hunger was created and produced by Matt Williams of Addition Media.