The Royal British Legion's ‘Thank You’ movement, is today marking the centenary of the end of the First World War, by saying ‘Thank You’ to the men, women and children that made up the truly inspiring First World War generation, both on the front line and on the Home Front – through the lens of well-known personalities brought on board by purpose PR and celebrity endorsement agency Chloe Franses & Co.

Currently running alongside the Poppy Appeal, the ‘Thank You’ movement recognises the sacrifices made by an entire generation. Their incredible legacy includes not just ground-breaking social change and timeless works of art, but also pioneering innovations in medicine and technology such as parachutes and prosthetics.

Recognising the ongoing value of developments from the war, in this new film several public figures remind viewers of the legacy and innovations that really matter to them – as everyone has something to be thankful for.

Mark Strong says thank you to the Armed Forces for everyday innovations such as the widespread wearing of wrist watches.

Bear Grylls gives his thanks for the pioneering of the way we now use parachutes.

Dr. Christian Jessen expresses his gratitude for the life-saving medical innovations that took place during the First World War.

Justine Roberts, Founder of Mumsnet, pays tribute to the enormous strides made in women’s rights thanks to the women of the era.

Tina Hobley, Smooth Radio presenter, reminds us that it was during the First World War that the technological advances that paved the way for modern radio took place.

Richard Whitehead is thankful for the major developments in prosthetic limbs that still help us today.

All communities are being encouraged to join the movement by expressing their thanks, with a number of high-profile organisations already supporting the movement, including the English National Ballet, Diwali in the Square, Highclere Castle, Cadbury, the RFU and many others.

Richard Whitehead said: “It’s a great privilege for me to be able highlight the sacrifices and achievements of the First World War generation and say ‘Thank you’ to those that lived through a tragic and remarkable time.”

Catherine Davies, Head of Remembrance at The Royal British Legion, said, “It’s great to have such well-known personalities lend their time and support to such an important cause, as we mark 100 years since the end of the war. Our ‘Thank You’ movement, which has been running since the summer, has been created to honour not just those who fought and died in the First World War, but everyone – military and civilian – who served, sacrificed and ultimately changed our world for the better.”

Chloe Franses, Founder & Director, Chloe Franses & Co said: “This is an hugely important campaign, and we are so honoured to have been able to bring on board such inspirational celebrity voices to help recognise the sacrifices made by those in WW1 and highlight the profound influence the developments during that time continue to have in all our lives today.”

Visit www.rbl.org.uk/thankyou to find out more.

All talent was secured by Chloe Franses & Co. 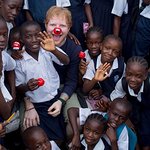 On May 5th at Leadercast, the largest leadership event and community in the world, people put on Red Noses and helped launch a new Good Exchange. More →