Through Bafilemba’s profiles of heroic Congolese activists, Gosling’s photographs of Congolese daily life, and Prendergast’s narratives of the extraordinary history of exploitation and evolving social movements that directly link Congo with the United States and Europe, “Congo Stories” provides windows into the history, the people, the challenges, the possibilities, and the movements that are impacting the course of Congo’s destiny. The book features a foreword by Soraya Aziz Souleymane, afterword by Chouchou Namegabe, postscript by Dave Eggers, and illustrations by Sam Ilus.

“We were told many personal stories by many people, but a central theme emerged. It was one of an unwavering refusal to be silenced or broken,” said Ryan Gosling. “It’s hard for me to imagine being able to move on after the horrors many of them have experienced. However, they have gone beyond moving on. To have the strength to take those nightmares and use them as fuel to make the hopes and dreams of their families and country a reality is the definition of heroic.”

The authors are donating 100 percent of their proceeds to create a Congo Stories Upstander Fund, which will provide support to many of the Congolese heroes profiled in the book in their efforts to create a better future for Congo.

“Wealthy commercial interests from outside the country — including human traffickers, kings, colonists, presidents, tycoons, bankers, mining magnates, arms dealers, mineral smugglers, elephant poachers, and military leaders — have colluded with Congolese leaders to loot the country of its greatest resources,” said John Prendergast and Fidel Bafilemba. “By following the money and greed, we tell the story of how major global events have driven huge surges in demand for Congo’s riches — from colonial plantation agriculture to the advent of the automobile, from the Industrial Revolution to World Wars I and II and the Cold War, to the dramatic expansion of the global weapons trade, the rise of cell phones and laptops, and the mass marketing of electric and hybrid cars.”

The authors profile Congolese heroes like 2018 Nobel Peace Prize winner Dr. Denis Mukwege, all of whom are battling against a tidal wave of corruption, violence, and exploitation on a scale with few parallels in the world. 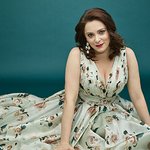 The SAG-AFTRA Foundation announced today the host, final musical performer, and several presenters for the 3rd annual Patron of the Artists Awards benefit which takes place Thursday, November 8 at the Wallis Annenberg Center for the Performing Arts in Beverly Hills. More →