The United Nations is highlighting the important role that population trends play in promoting sustainable development, during the annual Commission on Population and Development, which began at UN Headquarters in New York last week.

This year’s Commission is also an opportunity to take stock and review progress made since the landmark International Conference on Population and Development (ICPD), which took place 25 years ago in the Egyptian capital, Cairo. The 1994 event resulted in a Programme of Action, based on the idea that investing in individual human rights, capabilities and dignity, is the foundation of all sustainable development.

The Programme was described by the UN as “revolutionary”, because it succeeded in bringing together diverse views on human rights, population, sexual and reproductive health, gender equality and sustainable development, in the search for a global consensus.

This year’s Commission will examine the many gains that have been made in implementing the Programme of Action, but also the gaps and shortfalls in achieving its goals and objectives: these must be addressed, says the UN, if we are to achieve the 2030 Agenda for Sustainable Development, the UN’s plan of action for bringing about a better and more sustainable future for all.

Speaking on behalf of Liu Zhemin, Under Secretary General for Economic and Social Affairs, and head of the UN Department of Economic and Social Affairs (DESA), Maria-Francesca Spatolisano, Assistant Secretary-General for Policy Coordination and Inter-Agency Affairs, drew attention to the four demographic “mega-trends” that are shaping the world in fundamental ways: population growth, population ageing, international migration and urbanization.

The two latter trends, international migration and urbanization, “affect the spatial distribution of population,” she said, “and are linked in various and complex ways to the process of sustainable development. While it is right to celebrate achievements, we must also prepare for a world that is larger, older, more mobile and more urbanized than ever before.”

In her address, Dr. Natalia Kanem, Executive Director of the UN Population Fund (UNFPA), credited “national strategies and leadership, United Nations agencies, civil society, communities and our partners,” for their role in bringing about the progress made since the International Conference on Population and Development.

“The vision and values of the ICPD, that development must be people-centred, and attention paid to strengthening equal access to health, education and human dignity for all persons, anticipated the vision and values of the 2030 Agenda, our common blueprint for peace and prosperity, for people and the planet now and in years to come.”
UN Deputy Secretary-General, Amina Mohammed, speaking on behalf of Secretary-General António Guterres, warned that efforts on some Sustainable Development Goals are not keeping pace with population growth, citing targets on poverty in the least developed countries, child marriage, and people living in urban slums.

“While the percentage of affected persons may be declining,” she said, “their number is still rising. It is time for the world to show greater ambition and urgency around SDG implementation that is fully aligned with the Cairo Programme of Action.”

Ms. Mohammed emphasized the importance of gender equality in the implementation of the Sustainable Development Goals, and the involvement of women and girls as “agents of change,” with the ability to make decision that affect their bodies and lives, including reproductive rights, and access to quality education.

Also speaking at the opening session was film and TV actress, and Goodwill Ambassador for UNFPA, Ashley Judd, who said on social media that she was appearing as a messenger for “the 6.7 million girls who will be forced into marriage this year, as well as the 214 million women who are unable to access family planning, the 300,000 women who will die preventable deaths whilst giving life this year.”

Ms. Judd followed the deputy UN chief’s remarks on gender equality by describing the ICPD as a “paradigm shift,” that placed the future of the world’s development firmly in the hands of women and girls, and demanded that we have the rights to make decisions over our own bodies, to have our bodily integrity and our sexual autonomy. 25 years of evidence and practice continue to support this consensus and prove that this mission is as vital and critical today as it was then."

Data from the UN shows that progress has been made in many population-related areas, but that there is a significant regional disparity. In all regions, for example, people are living longer, with average global life expectancy rising from 65 to 72 years, but there is a 15-year gap in that figure, between citizens of the most and least-developed countries.
Child mortality is also moving in the right direction, having fallen by half in the last quarter-century but, here again, there is a marked regional disparity. Child mortality levels in Sub-Saharan Africa have dropped from 180 to 78 deaths per 1,000 births, but the child mortality rate in the region is still 15 times higher than that of children born in developed regions.

As for family planning needs, 78 per cent of women who are married, or living with a partner, have access to modern methods of contraception – up from 72 per cent in 1994 – but that figure drops to less than 50 per cent in 44 countries, mostly in sub-Saharan Africa and the southern Pacific island nations. 90 per cent of urban growth is projected to take place in Africa and Asia over the next two decades, and the share of the world’s population living in urban areas is expected to rise from 56 per cent now, to 68 per cent by 2050.

The Commission will look at several population-related topics which contribute to sustainable development, including government policies to expand access to sexual and reproductive health care services, including family planning; policies to improve education quality and access; and ensuring sustainable patterns of consumption and production. 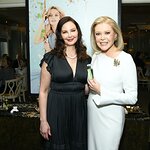 The Eyes of Thailand Trailer

A Conversation with President Clinton and Ashley Judd