Passenger To Donate All Profits From New Album To Shelter

Award-winning musician Passenger – aka Mike Rosenberg – has announced that 100% of the profits from his exciting new album Sometimes It’s Something, Sometimes It’s Nothing At All will be donated to Shelter.

With 65,000 families, including 131,000 children, homeless in Britain right now, Mike has chosen to use the proceeds from his ten-track LP – released today – to help fund the charity’s vital Family Support Services.

Operating in seven locations across the country, the Family Support Services work intensively with hundreds of homeless families every year to help them overcome both the immediate and underlying causes of homelessness.

Commenting on the collaboration Mike said: “When I started out, I spent a lot of time busking around the UK and in Brighton where I live, which really opened my eyes to the number of people forced to sleep rough. So, I was even more shocked when Shelter told me about the thousands of homeless families out there, hidden from view in hostels and emergency B&Bs. It’s made me realise how lucky I am to have a safe place to call home – something everyone should have – so this donation is something I could do to help in a small way.”

To mark the album release, Mike dropped into Shelter’s flagship charity store at Coal Drops Yard in Kings Cross, where he met staff, as well as Francesca whose family was homeless and helped by the charity. During his visit he also played the title track from the new album, live for the very first time.

Polly Neate, chief executive at Shelter, said: "We are incredibly excited that Passenger has chosen to support Shelter through this very special partnership, which will see 100% of the profits go towards funding our vital Family Support Services.

“With 131,000 homeless children living Britain today, this is a crisis that simply cannot be ignored. The proceeds from Passenger’s album will help our dedicated support workers to find safe, secure homes for the many homeless families and children who desperately need us right now.”

Sometimes It’s Something, Sometimes It’s Nothing At All, is available to buy and stream (digital download, CD, Vinyl) from digital stores across the UK from today, and from the artist webstore here. 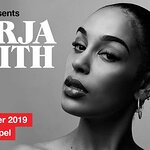 BRIT Award-winning musician Jorja Smith has been announced as the headline act for Shelter's Christmas music gig this year, which will raise funds for the charity’s urgent festive appeal. More →