Pat Boone to Honor Military and Veterans on Memorial Day 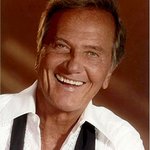 According to Mr. James Etter, the event Organizer, Pat Boone is making a personal appearance at this event to honor our Veterans. The popular singer has sold more than 45 Million Albums to date. Boone is the #10 all time top recording artists, according to Billboard.

To have such an icon coming to our Memorial Day Celebration to thank our Military and pay respect to those who made the ultimate sacrifice is quite an honor according to Pierce Brothers General Manager Javier Fernandez. Pierce Brothers has presented Memorial Day events for approximately 30 years and is hosting this year’s event, where they will feed 500 Veterans a free lunch.
The announcement that Pat Boone is attending to bless those who have served is not rare for Mr. Boone, as in recent years he is well recognized as an evangelist and patriarch. His message will undoubtedly ring that chime during his appearance with us on this coveted day according to Etter, the coordinator of the event.

An OLD SCHOOL Celebration with more than 5 bands, community displays, food trucks and “Old School” Classic Car Show presented by the Clunkers Car Club of Burbank will be something you will not want to miss and FREE to the public. Gate opens at 10:00 AM for the day long event.

The entertainment will include, Pat Boone, The Valley Boys (Country Rock) – The American Roots Revival (in the style of the 20’s 30’s and 40’s) – The Andrews Sisters Tribute Show (by The Sugar Sisters) – Brass Band Concerts (from The North Valley Institute) – River Oaks (all Ladies Chorus) “Elvis Live” Las Vegas style review (by Larry Sanders) The opening ceremony will include prayer by Pastor John Barta, with inspirational songs from Darlene Gardner and Sian Michelle Guirao.