Jamie Bamber Bares All For Bears

By Elizabeth Willoughby on March 5, 2009 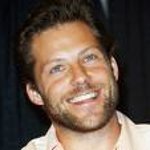 PETA's newest instalment of the “Bare Skin, Not Bear Skin” campaign stars actor Jamie Bamber as himself, baring his skin and speaking out against the use of real bear skins in the caps of the Queen’s guards.

Frustrated that black bears are still being killed for the use of their fur in uniforms, Bamber says, “These caps are just ceremonial caps. They serve no purpose. Why kill more animals? The obvious alternative is to make caps out of faux fur. They’re not to keep warm. It’s not particularly freezing outside Buckingham Palace. You could wear something else. It just seems to me a no-brainer.”

He’s also opposed to the methods used in catching the animals in Canadian forests. “What these hunters do is basically trap these bears,” says Bamber. "[Hunters] bait them into coming out of their natural behaviour or routes and modes and shoot them as they eat the bait they’ve been set.

“Animals just represent a very easy target, I think. We’ve abused them for far too long. We should just be responsible in terms of the way we cohabit. I just don’t understand how as humans we haven’t quite bridged that understanding.”