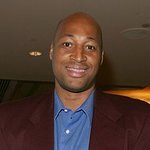 From 1991 to 2001, Derek Strong played in the NBA for the Washington Bullets, Milwaukee Bucks, Boston Celtics, Los Angeles Lakers, Orlando Magic and Los Angeles Clippers. And when he retired, Strong did something that no one else has. He became the first NBA player to successfully transition into NASCAR as a driver.

Now, Derek’s STRONG Racing team is breaking barriers. It’s the first team in NASCAR history to have African-American female owners – Dawn Whitaker and Erica Hill. Hill is also the co-founder of Peace International, a non-profit organization whose primary mission is to build schools in remote areas throughout the world.

Look to the Stars first talked to Derek Strong at the Shane's Inspiration Shooting Stars Gala, where he spoke about his love for kids.

“I played in the NBA for about 11 years and every year we did something with children’s hospital, we did things to help inner city children and I’ve been around children practically all my life, and I think it’s very important that we do get out there because they are our future,” he said from the red carpet.

After making such a statement, Look to the Stars had to interview him about his love for kids, his diverse and inspirational racing team, and what inspires him.

Derek, we met you at the Shane’s Inspiration event last month where you mentioned your love for children. Was there one particular event that prompted you to get involved with children and charity?

“Yes, when I went to the children’s hospital. It really touched me, seeing these kids hooked up to IV’s all day, confined to their unit, and not knowing if they would live to see the next day. It was heartbreaking. They are just starting out in life and they’ve been in the hospital everyday fighting cancer or another illness. And I want to help, help the kids, help the families, help find a cure because they should be outside playing with other kids, they should be on the playground not in the hospital.”

Have you had an opportunity to work with any of these kids?

“That’s what I’m trying to do now. I want somehow for our racing team to donate a percentage of our wins to the hospitals or to organizations that help the kids. This is really what I’m trying to accomplish because children are our future. As an adult we can guide them in the right direction and help them. As the future generation, they’re our future survival, and the more we give them and guide them in the right direction, they’ll turn out okay.”

You founded Strong Racing in 2001, what kind of success are you having?

“We started racing in 2001 and we progress every week. We have potential to do very well. When we started, we declined a bit, but now we’re finding the chemistry and I think we’re going to do well.”

How would you recommend other people get involved in charity work?

“First thing is to find what touches you, what moves you. And then research.Find an organization that benefits your cause. Get involved. Follow you heart.”

Do you think Hollywood is sort of ‘obligated’ to get involved?

“I don’t think anyone is ‘obligated’ but I do think there should be some involvement.”

“The talent to heal.”

What trait do you most admire in others?

“Resilience. When someone is planning on doing something, and no matter how hard it is, they stay on course until they get what they want. I admire that.”

Aside from family, who has been a personal inspiration to you?

“A teammate of mine from college, he was like my brother and taught me about life and kept me on the straight path.”

Look to the Stars would like to thank Derek Strong for taking the time to speak to us, but more importantly, for taking an interest in helping the children and inspiring others to do the same. To view the video of Look To The Stars talking to Derek Strong at the Shane’s Inspiration Shooting Stars Gala, click here.