Attend An Audience With Jerry Springer For Charity 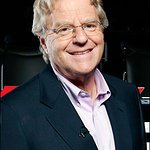 Jerry Springer, host of The Jerry Springer Show and former mayor, is doing some incredible things with his time all in the name of charity.

Jerry is currently playing Billy Flynn in Chicago the Musical and hosting an Audience with Jerry Springer on June 10. All of this is happening at the Cambridge Theatre in London. Tickets cost £50 and are limited in availability. Ticket price includes admission to the show and also to the special session with Jerry Springer.

An Aundience with Jerry Springer will be an opportunity for guests to have a Q & A session with Springer. Proceeds from the event will be donated to Karen Berman, professional fundraiser, and Jane Collins who will be running in the Chicago Marathon in October. This will be in support of the Teenage Cancer Trust, a charity that is devoted to improving the lives of teenagers and young adults who have been afflicted with cancer.

The charity builds units equipped with the latest medical equipment but which also have day rooms, chill-out rooms and kitchens and much more for teenagers with cancer. The goal is to make the units as comfortable as possible while the teens and young adults are there and to give them a place to build friendships while coping with their diseases.

Check out Chicago the Musical featuring Jerry Springer as Billy Flynn and then stay to be a part of “An Audience with Jerry Springer” on June 10 at Cambridge Theatre in London. Visit the Teenage Cancer Trust website for information on booking tickets in advance.