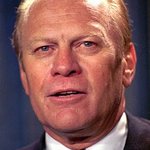 On July 7, over 500 items belonging to the late, former President Gerald Ford and his wife Betty, will be auctioned, with proceeds benefiting three charities important to the Fords. The auction will take place in Beaver Creek, Colorado, location of one of the Fords’ residences.

Auction items include: President Ford’s golf clubs, his skis, the President and Mrs. Ford’s engraved crystal, their personal American flags, artwork, furniture, clothing (such as ski jackets, ski boots), sculptures, books, kitchen ware, collectibles, decorative household items, silver, rugs, Christmas ornaments, antiques, and lamps. Hundreds of other items will be sold the day before the auction at a tag sale. Many local companies have contributed products and services for the auction, which is hosted by New York-based Guernsey’s auction house.

The non-profit organizations to benefit from the auction and tag sale are The OK Corral Camp, The Eagle River Scholarship Fund, and Betty Ford Alpine Gardens.

The OK Corral Camp is a camp for children with life-threatening illnesses, set to open in 2010. The camp, which will be located in the mountains of Colorado, will be a place where ill children can focus on something other than their illnesses. It is in the process of becoming a member of Paul Newman's Hole in the Wall Gang camps.

The Eagle River Scholarship Fund awards scholarships for post-secondary education to those in need. It has awarded over $600,000 to students since it was established in 1974. President Ford supported the Fund both privately and through proceeds from the Jerry Ford Celebrity Golf Tournament. For many years, he personally presented the annual awards to the scholarship recipients.

Betty Ford Alpine Gardens is the highest botanic garden in the world, and specializes in alpine plants. It resides at an elevation of 8,250 feet, receives 100,000 visitors annually and aims to educate visitors about the plants native to alpine climates and elevations.

For more information about the auction and the tag sale and benefit preview party preceding it, see the Guernsey’s auction house website.

As The Hole in the Wall Gang Camp prepares to welcome campers for its 35th summer in Ashford, Conn., CEO James Canton and Board Member Bradley Cooper announced today that the organization will open a second location on the Eastern Shore of Maryland in 2023, providing “a different kind of healing” to more children with serious illnesses and their families in the Mid-Atlantic. More →