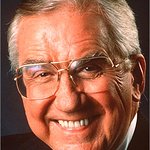 Known for his work as Johnny Carson’s announcer on The Tonight Show from 1962 to 1992, McMahon was also host of the talent show Star Search from 1983 to 1995 and co-host with Dick Clark of TV’s Bloopers and Practical Jokes from 1982 to 1986. He was also well-known for hosting Jerry Lewis' annual Labor Day Telethon for Muscular Dystrophy.

Although he suffered from ill health in his later years, McMahon still found time to carry out charity work. He was honored by the Kayne Eras Center for his work with children and education, and also attended the The California Disabled Veteran Business Alliance's Annual Salute to Veterans Day Breakfast last year. McMahon also hosted charity golf tournaments over the years.

Legionnaires of Laughter (LOL) will hold it’s first-ever Legacy Awards on December 10th, 2018 at Cipriani Wall Street in Downtown New York City. The evening will be hosted by comedian Ken Jeong and will include several special performances and special guest appearances. More →