Lord Of The Rings Actor Abseils For Charity 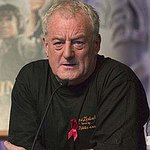 Lord of the Rings actor Bernard Hill was part of a charity event in the UK earlier this week to raise money and awareness for a campaign to help the Royal National Lifeboat Institution train new volunteers.

Hill, who played King Theoden in the movie trilogy, joined actor David Morrissey in abseiling down the iconic Southwold Lighthouse for the event.

The RNLI charity saves lives at sea. Its volunteers provide a 24-hour search and rescue service around the United Kingdom and Republic of Ireland coasts. It operates over 230 lifeboat stations in the UK and Ireland and has more than 100 lifeguard units on beaches around the UK. The RNLI is independent of Coastguard and government and depends on voluntary donations and legacies to maintain its rescue service. Since it was founded in 1824, its lifeboat crews and lifeguards have saved over 137,000 lives.

“It shouldn’t be a charity – it should be a state-funded institution like the NHS,” said Hill. “It’s a mark of the quality of the people that volunteer for it because people would just die out there without their help. It’s a vital service. People don’t understand what the sea is about and how dangerous it can be, that in five minutes it can all change.”