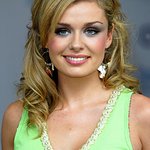 Last week she was spotted at the Macmillan Cancer Support De’Longhi Art Auction, following the announcement that the charity is hoping to name her as an ambassador.

“Macmillan looked after us when my father was ill, so I always sing or do something special for their events,” she said. “I bought the first painting at the auction for £1,800 because the charity is so special to me.”

Later in the week she appeared at the Westfield Shopping Centre in London for a special Breast Cancer awareness event, alongside Jamelia and Beverley Knight.

“Breast cancer touches women of all ages and it is vital that as many people as possible are encouraged to help fight the disease,” said Jenkins. " The work that breast cancer charities do is crucial to raise awareness and I am an active supporter of these initiatives."

More info about the initiative can be found here.