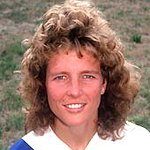 Retired soccer star Michelle Akers scored 105 goals in 153 games for the Women’s U.S. National Soccer Team, making her a pivotal member of a groundbreaking team that captured two World Cup titles and the first women’s soccer gold medal in Olympic history at the 1996 Atlanta Games, and now, Akers desperately needs our help to save her and her rescued horses.

When Akers retired nine years ago, she began rescuing horses. One rescue led to another and before long she traded in her Florida home for an eight-acre spread in northwest Atlanta. She eventually established Michelle Akers Horse Rescue.

“I beef ’em up, love on ’em, then adopt them out,” she explains, “There’s something divine about them. Horses choose you. You have to earn it. You have to prove it to them every day. You have to get them to say, ’You’re cool. I like you. I want to be with you.’ When it happens, it’s like, ’Oh my gosh, this is awesome.”’

But Akers dream is in danger as record flooding in Georgia has left her with about $50,000 in damages to her eight-acre farm, forcing her to auction off some of the memorabilia from her soccer career to pay for the repairs.

“This stuff just becomes unimportant when compared to my horses and the ones who are suffering,” Akers told The Associated Press. “I’m like, ‘Oh my God, I’ve got to do something. I can’t just sit here and say I don’t have any money when I have something I can do to help.”

Akers bold move to sell her priceless items is one of the most touching gestures to come from a sports star, who has placed her love for horses above the material value of her autographed Pele jersey; the ball she used to score her 100th career goal; the cleats she was wearing when the U.S. won its memorable World Cup title at the Rose Bowl a decade ago; and even a Wheaties box with her on the front.

“Michelle Akers is a legend not only in the world of women’s soccer, but soccer in general,” said Robert Penner, a WPS league spokesman. “She left it all out on the field. She deserves for soccer fans to recognize not only all she did when she played, but what she’s doing now with her horse rescue farm. The dedication she showed to soccer is now showing in another walk of life.”

When her old coach, Tony DiCicco, heard of Akers’ auction plans, he began a fundraising effort through his current job with the Boston Breakers, a team in the Women’s Professional Soccer league.

“There has got to be a better way than this,” DiCicco wrote on the team’s Web site. “Michelle is going through a difficult time and needs some assistance and if you know Mich, she is not going to ask for any help.”

DiCicco and Breakers general manager Andy Crossley both made personal donations. The organization pitched in, too, announcing any money raised through season ticket sales by Friday would be donated fully to Akers’ horse rescue group.